Mid-range tire brands are becoming more and more popular. Good performance at a lower price is what some people are looking for. Take Falken, for example, with its Pro G4 A/S. It’s a high-performance all-season tire designed to provide a sporty feeling to coupes and sporty sedans.

To be fair, it’s not a tire that you’ll be comparing side by side with the Dunlop’s Sport Maxx or Bridgestone’s Potenza. Despite that, it should provide excellent performance, at least according to Falken.

What are the features of the Falken Pro G4 A/S?

On paper, the Pro G4 A/S seems like it ticks all the boxes when it comes to drivability in multiple weather conditions. The silica enriched rubber compound is designed to offer plenty of performance in hot and cold weather. 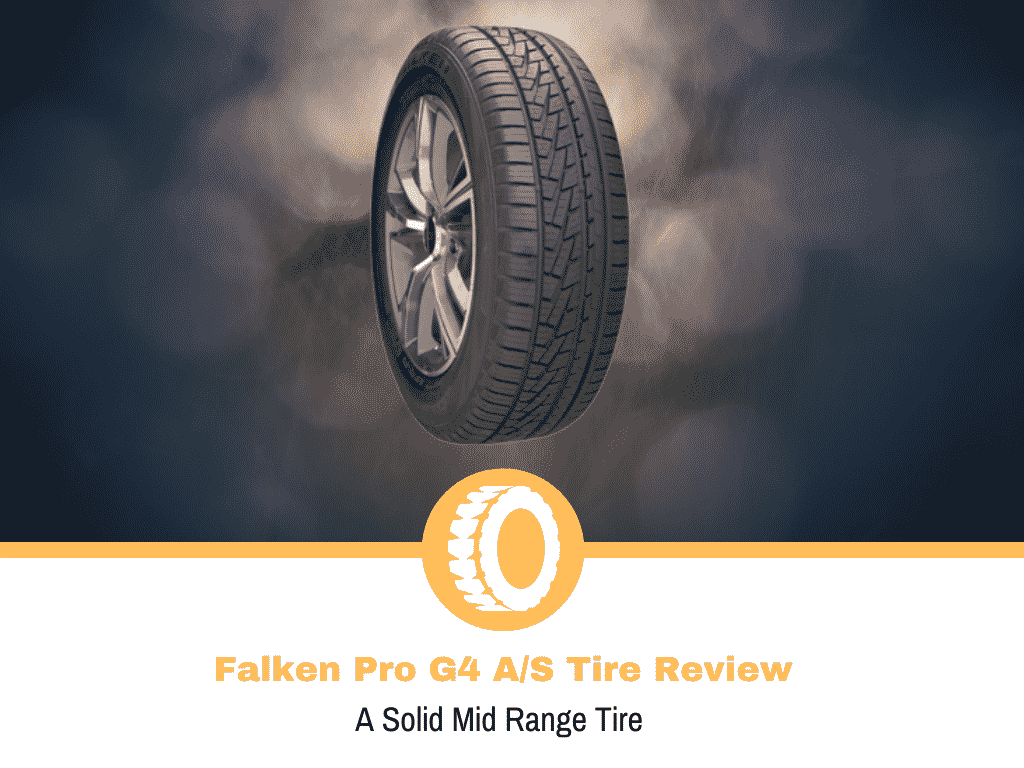 Falken also worked a bit on the rubber to ensure that it last longer. This is not typical for some high-performance tires, but it’s a welcomed change in this one.

Falken’s Dynamic Range Technology is, and the asymmetric tread design is there to ensure that the tire has plenty of performance on dry and wet roads. The Pro G4 A/S is designed with 3D sipes at the shoulders. They help with responsiveness and stability and enable to tire to bite down into the snow. I’m not expecting too much from this tire in the snow, but as an all-season one, it should be drivable in light snow.

As a bonus, the sipes and tread design should help in heavy rain conditions and offer better aquaplaning resistance.

Thanks to the broader shoulder blocks that work with the 3D sipes, Falken claims that you will notice the sporty characteristics of the tire. More direct responsiveness and more feedback should be there, without too much compromise to the comfort.

The Pro G4 A/S performs pretty well in dry conditions, as long as you don’t expect too much. It’s not comparable to the ultra-high-performance tires from Dunlop or Bridgestone, but that’s the tradeoff for going for a budget-friendly option.

The tire feels planted and stable on the straights, and while you will feel a bit of vibration, it won’t happen at normal speeds. Only when you reach the upper end of the tire’s spectrum will you feel the car vibrate.

In the corners, the grip is decent enough to inspire confidence and make you feel safe. It will have plenty of grip as long as you don’t push it too far. Once that happens, the Pro G4 A/S is controllable.

The driving dynamics are decent enough and are better than regular all-season touring tires. It is responsive and gives you a sporty feeling, but I think that the feedback could use a bit of work.

The performance on wet and slippery roads is good, and the Pro G4 A/S proves to be capable in those conditions.

Again, don’t expect the best of the best performance, but don’t expect to disappoint either. The tread design helps keep the tire planted regardless of whether it’s straight-line driving or in the corners.

The tread design, meaning the grooves and spies do an excellent job at evacuating water away from the blocks. As a result, the Pro G4 A/S is great at aquaplaning resistance.

Overall it’s not a bad performer. The Pro G4 A/S has decent capabilities on wet roads but cannot be compared with the likes of Pilot Sport or P Zero.

The Pro G4 A/S is not a tire that you’d want to drive on snow in most cases. I’m not saying that it’s terrible; I’m saying that the snow performance is crippled.

Falken’s 3D sipes do help the tire have some bite in snow, but only in light conditions. If there is more than an inch or two, the traction drastically drops.

On the ice, the Pro G4 A/S seems to do a better job. Falken managed to tweak the rubber compound to operate in lower temperatures, so this isn’t too big of an issue.

At the end of the day, no all-season tire can be compared with a winter one, and the same goes for this one.

As a high-performance tire, you cannot expect refinement as with a touring one, but the comfort levels are surprisingly good. It’s not the most comfortable tire, and you will feel some road imperfections.

In terms of off-roading, the Pro G4 A/S is not something that can help you climb up a mountain. Falken designed the tire to be driven on roads, and that’s what you should do.

The occasional dirt road could be passable, as long as you decide to go rallying with it.

Is the Falken Pro G4 A/S ideal for sporty driving?

The Pro G4 A/S is not bad for sporty driving, but don’t expect it to wow you.

You can drive it as aggressively as you want, and the tire will comply. The problem with that is that while it will be responsive, the muted feedback could be an issue for some.

Considering the price range, the Pro G4 A/S won’t disappoint in terms of grip and stability. With plenty of grip in the corners, it will give your car a sporty feeling.

You could decide to take it on a track and have some fun. While it will perform as you want, other models may give you better performance.

Should I buy the Falken Pro G4 A/S?

The Pro G4 A/S is a tire that I can recommend, but not without mentioning a few things. Before you run out to the store, you need to be aware that it won’t be as good as the premium options I mentioned.

It will have a decent mount of grip on dry roads and will offer a sporty driving feeling. As soon as it starts raining, the performance will remain the same. Traction in the wet will not be a problem, and the tread design will provide superb aquaplaning resistance.

As a high-performance tire, the Pro G4 A/S is comfortable enough, but the noise takes a hit, which is not unheard of in this type of tire.

High-performance tires are not known for a particularly extended warranty, but that’s not the case with the Pro G4 A/S.

Falken sells the tire with H, V, and W speed ratings, and based on those, the warranty is different. H and V-rated tires get a 65,000-mile treadwear warranty, while the W-rated ones get 45,000.

Falken Pro G4 A/S Pricing: Is it worth the money?

When you consider the price and the performance – the Pro G4 A/S is worth the money. Looking at the performance alone, the tire may not wow anyone, but it makes for a good bargain when you factor in the price.

The starting price is a tad under $80, which is relatively cheap for a high-performance tire. For that, you get an all-season tire that is perfectly capable of decent performance on dry and wet roads. You could even do some light snow action.

High-performance tires aren’t known for comfort and low noises, and the Pro G4 A/S is a slight exception. The comfort is good enough for this kind of tire, but I feel like the noise can be a problem for some people.

You also shouldn’t worry about the longevity of the tire. With a 65,000 or 45,000-mile treadwear warranty, depending on the speed rating, it should last for quite a while.

High-performance tires are designed for one thing, but some tires can be good at multiple things at once. The Pro G4 A/S is that kind of tire – an all-season high-performance one with some touring-like properties.

In terms of performance, it’s good enough, especially when you consider that it’s a budget-oriented model. It can maintain its performance in hot and cold weather, and even the rain won’t bother it. With plenty of grip and excellent aquaplaning resistance, it’s not a tire that will disappoint.

When it comes to refinements, the Pro G4 A/S is on the comfy side. It’s not the best in that regard, but certainly not the worst. There are some touring properties that make it decent for everyday driving. Unfortunately, the noises are not on the low end, so you should expect to hear some tire roar now and then.

As an overall package, the Pro G4 A/S is an excellent choice. Plenty of performance for the price, and if you are looking for a fresh set of sporty feeling tires, this is a good option.

What Vehicles Will the Falken Pro G4 A/S Fit?

While the list may seem short, it’s only made to give you an idea of the type of vehicles that the Pro G4 A/S will fit.