We compare Toyo’s well-known Open Country AT2 all-terrain tire with its successor- the Open Country AT3 to tell you if there’s anything more to it or if it’s more of a cosmetic upgrade. 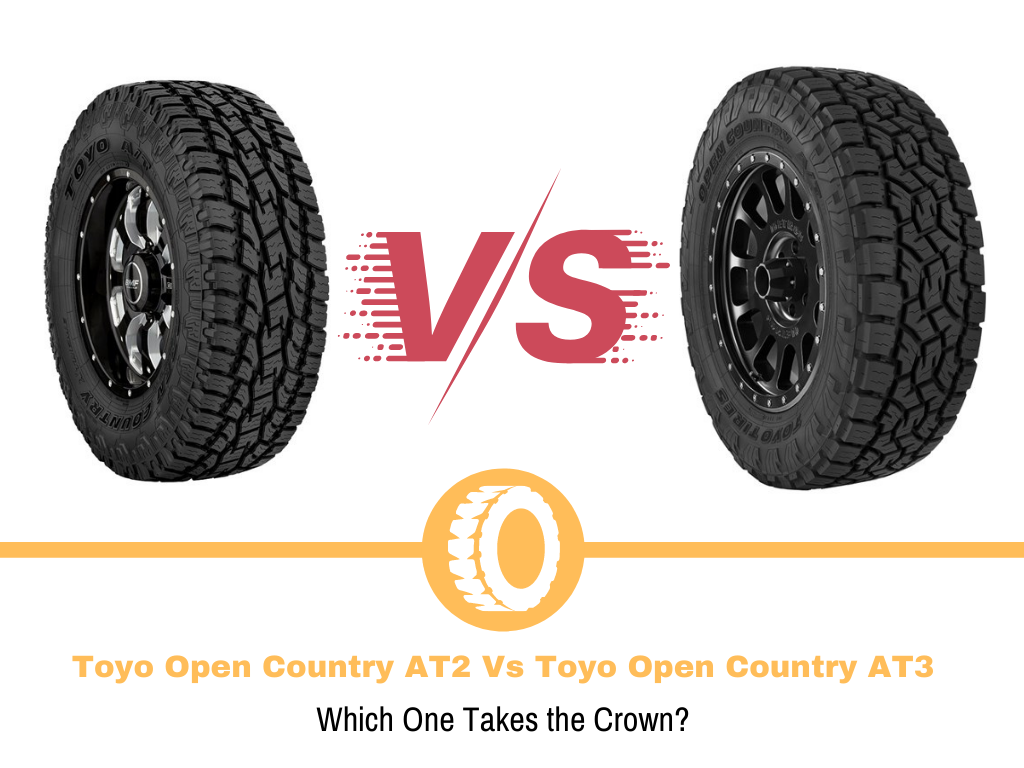 What is the Toyo Open Country AT2?

The Open Country AT2 was built for medium to large-sized SUVs, Jeeps, Pickup trucks, and Crossovers. Its main purpose was to tackle all challenges thrown at it off the road and offer an extended tire life whilst retaining most of the grip until the end. An aggressive sidewall pattern and a robust tread design made this a great all-terrain tire.

Coming to the on-road capability of the tire, it has been rather average and sedate. Snow Performance has been satisfactory when the winter isn’t severe while wet performance is just above average. However, the AT2 is known to perform great on rocks, mud, and uneven terrain.

What is the Toyo Open Country AT3?

The AT3 comes with all the kit that lacked in the AT2. Toyo has been proactive in listening to its consumers and thus, filled all the necessary gaps to make it a much better tire. The biggest change lies in the tread pattern and tread depth which has not only made the AT3 a much better off-roader but, it has made it a much advanced AT tire in the overall sense.

Drive it at first and you won’t notice the difference but, as one encounters varying surfaces and speeds, it gets easier to notice the up-gradation. The S-shaped tread blocks are tightly packed together on the tread with deeper gaps in between to minimize tread wear and enhance overall traction. To improve traction on wet surfaces, 3D Siping is deeper on the AT3. The sidewall design features more aggressive blocks than on the AT2 for enhanced protection. But, do all other improvements hint at the AT3 being a better tire on-road as well? Read on to find out in the detailed comparison.

Pros of Toyo Open Country AT2

Pros of Toyo Open Country AT3

What are the main differences between the Open Country AT2 and AT3?

Both tires are designed to reduce as much wear as possible. In the case of the Open Country AT2, the strong tread compound enhanced the tire’s life while the tread profile ensured an even contact patch. This improved rolling resistance and enhanced tread life. A sturdy build and a deeper tread depth made for all ingredients necessary for a long tread life.

However, things are better in the Open Country AT3. Toyo has gone a step further with this AT tire. The smaller S-shaped blocks on the tread offer a wider contact patch with enough space in between the blocks to help them move around in all directions. This flexibility combined with improved cut and chip resistance reduces treadwear rate by a small but significant margin than the AT2.

The Open Country AT2 has indentations on the sidewall for protection which is quite different from the improved protection on the AT3.

The S-shaped blocks on the AT2’s tread are cut in half, thereby causing the gap between them to reduce. This compromises off-road traction under severe conditions.

In the case of the Open Country AT3, the sidewall features aggressive blocks that do a great job of protecting it from rocks and other sharp objects. On the tread, the S-shaped blocks are separated uniformly with even spaces in between that help optimize off-road performance. The small differences in the tread and sidewall make the AT3 a lot better off-road.

The Open Country AT2 behaves more like an off-road tire. Though it doesn’t do a great job of it like the AT3, the tread pattern, tire compound, and toughness are engineered to perform over uneven surfaces and difficult terrain. Hence, the tire offers acceptable performance and grip on the road under controlled speeds. In terms of road comfort and noise control too, the AT2 offers average performance.

On the AT3, the closely-knit tread pattern offers a wider contact patch, thus improving traction on the road. On the outer ridges too, the space in between the ribs is optimized for better on-road stability and offers better control while cornering than the AT2 model. The comfort offered on the road is decent as the tread compound absorbs a decent amount of vibrations. In addition, road noise remains well controlled for an AT tire.

The difference in wet performance between both tires is marginal. The wide gaps between the blocks on the AT2’s tread channel water efficiently but, the contact patch is not as wide as on the AT3. This might cause the water to flow slowly, thus increasing the chances of hydroplaning.

The Open Country AT3 handles better on wet surfaces, thanks to the wider contact patch which offers maximum traction and confidence. The 3D siping on this upgraded version is deeper and so it does a better job at evacuating the water and prevents the chances of hydroplaning.

Toyo’s Open Country AT2 comes with a two Snow-Flake rating, meaning that the tire is mostly suited for conditions and terrain where snowfall is low and less severe in intensity. This is due to the same shortcomings that the tire faces in wet conditions against the Open Country AT3. With the available siping and tread pattern, the tire would struggle for traction in heavy snow conditions.

The AT3 however has reached a different league in the world of all-terrain tires. With a three Snow-Flake rating, the AT3 can simply bite and grip in deep snow without any hiccup. The improved tread pattern helps accelerate and brake aggressively without losing traction.

The AT2 is priced between $188 and $650 depending on the size of the tire. For the performance the tire offers, we’re not complaining at all. We think that the AT2 is a great tire for what it offers and at this price, it is a deal worth considering.

However, prices for the Open Country AT3 are not much higher compared to the AT2. With a marginal difference, prices for the tire start at around $190 to $700 depending on the tire size. For a few extra dollars, one can get access to a tire that handles and performs exceptionally well under all conditions. The value that AT3 brings to the table is simply epic!

With a 50,000 miles warranty treadwear warranty in addition to a limited warranty against defects on materials and workmanship based on miles covered, the Open Country AT2 falls short of the AT3 that offers a higher warranty for specific sizes.

In the case of the winner tire- the AT3, treadwear warranty for P/Euro-Metric sizes is covered up to 65000 miles whereas, for LT and Flotation sizes, warranty is offered up to 50000 miles. This is in addition to a limited warranty depending on the number of miles covered against defects on materials and workmanship.

Use Toyo Open Country AT2 if…

Use Toyo Open Country AT3 if…

To sum it up, the AT way, we think that Toyo has focused on the right areas to make it’s well-known AT tire even better. The upgrades made to the Open Country AT2 are not only cosmetic but also functional as they excel in almost all areas of performance. From dry traction, wet traction, winter performance, off-road performance to even value and warranty, the Open Country AT3 has outperformed the AT2 in all aspects.

While we’ve seen many model upgrades in the past, we must say that an upgrade of this sort where the new model outperforms the old model completely is quite rare. The AT3 then is worthy of all the praise and glory.