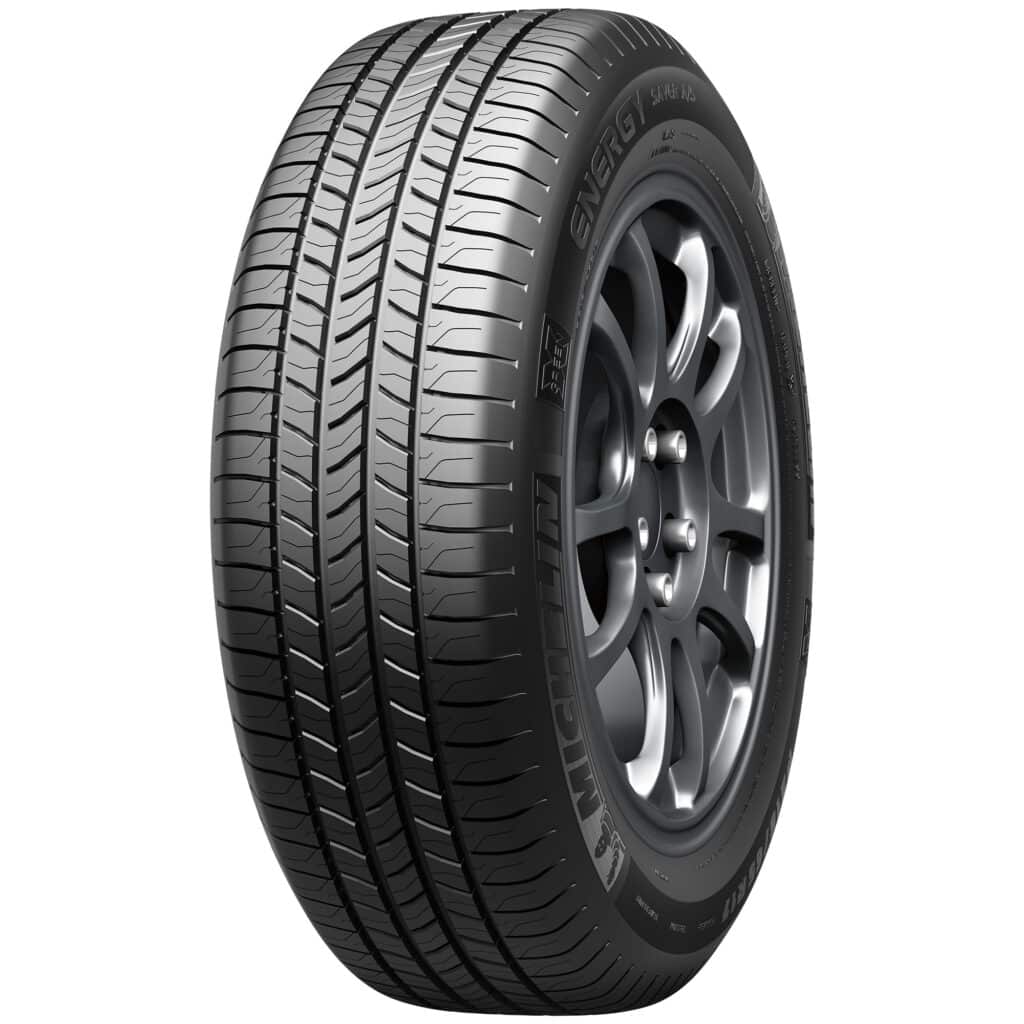 Slowly but steadily, we are reaching a point where car electrification becomes a thing. More and more manufacturers are putting hybrid models on the market, and some are even aiming for full electric.

One thing that these types of cars have in common is the goal to get the most out of a single charge or a full tank of gas. There are several areas where fuel consumption or range is improved, and one of those is the tires.

Since the tire is the part that puts the power down and gets the car rolling, it’s essential to be as efficient as possible. The principle relies on friction, so as an unwritten rule, the more friction a tire has with the road, the better the grip.

While that may be true, if you want lower fuel consumption, you’ll need a tire with a lower rolling resistance, like the Michelin Energy Saver A/S.

I have mentioned this tire in the past, but I’ll be doing a full review of it today.

What are the features of the Michelin Energy Saver A/S?

As a premium tire, the Energy Saver A/S comes packed full of features and technologies, and the main one revolves around the reduced rolling resistance. Michelin’s EnergySaver Construction technology works with a special tread pattern to achieve that. They help the tire remain cooler, thus reducing CO2 emissions and fuel consumption. 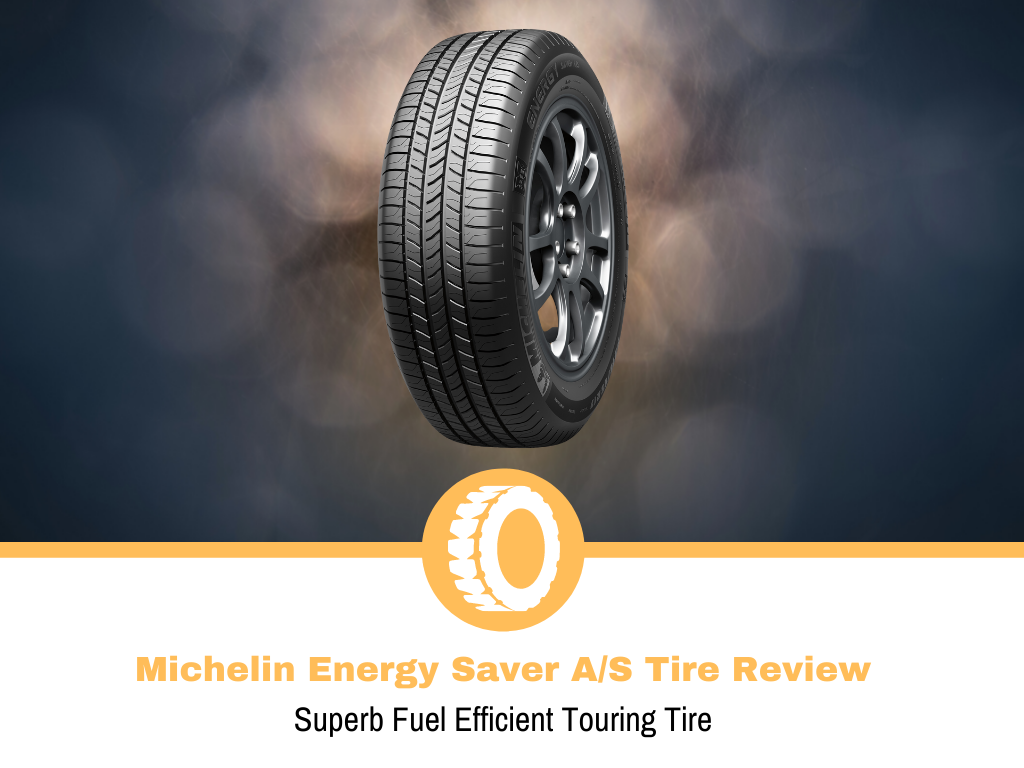 Speaking of the tread pattern, while it helps with the rolling resistance, it also is designed to help with usability in multiple conditions. As a result, the Energy Saver A/S is an all-season tire that should provide some usable experience in winter conditions.

Adding silica into the compound not only makes it pliable in the winter but also delivers some performance improvements. The pattern alongside the compound should enable the Energy Saver A/S to provide shorter braking distances and better traction than its competitors.

The Energy Saver A/S is a touring tire, meaning that it aims to last longer. To ensure that, Michelin utilized its MaxTouch Construction technology intending to distribute the forces evenly in various driving conditions. It means that the tire should wear more evenly, making it longer lasting.

Driving the Energy Saver A/S in dry conditions is something that the tire won’t disappoint at all. Sure, you won’t be able to compare it to something from Michelin’s Pilot lineup, but as a touring tire, it offers more than enough.

Considering that this is a touring tire, the levels of grip and traction are more than what you’d need. Even though this is not a tire primarily designed to be pushed hard, you shouldn’t have any issues with it. I wouldn’t put it at the top, as Michelin’s flagship models already occupy those spots, but I will say that it’s far better than the average. In its class, it manages to outperform Goodyear’s Assurance Fuel Max, a tire designed with similar specifications.

Braking is another area where the Energy Saver A/S delivers excellent results. Again, it’s very close to the Fuel Max model, with a difference of a few inches in favor of the Michelin tire. There are models that can deliver shorter braking distances on a grander scale, but for this category, the results are excellent.

There is an option to push the Energy Saver A/S a bit more, and thanks to the compound and its ability to keep the temperature constantly on the lower end of the spectrum, the performance will be consistent.

In wet conditions, the Energy Saver A/S continues to deliver excellent performance, on par with most of its rivals. It seems that Michelin nailed it with the compound and sipe combination, which resulted in a tire that won’t disappoint on wet roads, at least in most cases.

Traction is not an issue as the sipes seem to bite into the wet tarmac and get the car going without too much wheelspin. Like in most cases, you can light up the tires, but you’ll need to be quite aggressive for that. The grip is also excellent in the corners, and even if you get carried away, you shouldn’t have too many problems. The Energy Saver A/S is prone to understeer, which is more or less similar to most touring tires.

In heavy rain conditions, the Energy Saver A/S is a bit disappointing. The aquaplaning resistance in a straight line is very good, and the tire can handle higher speeds with ease, but that isn’t the case in the corners. Naturally, you won’t be going into a corner at enormous speeds with this tire, but near the limit, the aquaplaning resistance is a bit behind its competitors. This shouldn’t be a massive issue, as this is a tire that you wouldn’t get for going on a track with it.

Finally, braking is an aspect where the Energy Saver A/S delivers excellent results. Thanks to its short braking distances, the tire is near the top of its class. Keep in mind that I am comparing it with other fuel-efficient tires, so it’s not like it will outperform some flagship grand touring or performance-oriented tires.

All-season tires are designed to provide some performance in winter conditions. The Energy Saver A/S follows that trend, but isn’t as good as some of its rivals.

If the roads are clear, the Energy Saver A/S shouldn’t have too many issues with grip and traction. These aren’t situations where you’d drive on the limit, so you won’t be struggling to control the car. There is a usable amount of traction in light snow conditions, but it’s not on the same level as something like the Yokohama AVID S34PV or the Michelin Energy LX4.

Harsher conditions are even worse for the Energy Saver A/S as the tire will begin to struggle for traction. Things become even worse if there is ice on the road, situations where the tire feels almost unusable.

While It’s far from terrible in the winter, when compared with some of its rivals, the Energy Saver A/S is slightly above average in these conditions.

One of the many things that make a good touring tire is refinement. Michelin tried to achieve this, and in some areas, it managed it, but it failed a bit in others.

The positive side of the Energy Saver A/S is the comfort level. You can expect a soft ride from a tire that will absorb bumps and road imperfections with ease and eliminate vibrations transferred to the cabin. There are better options out there and slightly more comfortable ones, even in Michelin’s lineup, but this isn’t the worst one.

On the other hand, there is the noise, which isn’t this tire’s strongest side. For the most part, the Energy Saver A/S is a relatively quiet tire and won’t produce a lot of noise. With that said, the biggest problem the tire faces is when driving over rougher roads. In this case, the noise is significantly higher, which may be an issue for some people.

There are many things that touring tires can do, but going off-road isn’t one of them. The same can be said about the Energy Saver A/S, a tire that isn’t designed for those conditions.

Off-roading with this tire can lead to premature wear or damage to the tire and lack of performance. The rubber compound and tread pattern aren’t made with off-roading in mind, so I’d advise you to avoid it.

Like with most tires from this category, a quick drive on a dirt road is possible, but you need to be careful.

Is the Michelin Energy Saver A/S ideal for sporty driving?

When we look at the Energy Saver A/S, we look at a comfortable daily driver, not a tire that can satisfy an enthusiast. While it’s not the best in this regard, I wouldn’t classify it as the worst.

The Energy Saver A/S delivers a good amount of grip, so going into a corner at a higher speed won’t result in the worst experience. On the handling side of things, it’s not a tire that wants to be pushed.

Overall, the Energy Saver A/S handles decently, and while it is responsive, it’s not something you’d want with you on the track. It can handle some twisties with a bit of fun, and that’s as much as you should expect from it.

A longer warranty is something that touring tires are known for, and the Energy Saver A/S is no exception. Michelin offers the tire with a 65,000-mile treadwear warranty for the S, T, and H-rated models, while the V-rated ones get 55,000 miles. This is on par with the rest of the premium offerings in this category.

Michelin Energy Saver A/S Pricing: Is it worth the money?

There are some things that Michelin is very good for, but the value isn’t one of them. While the tire is a bit on the affordable side of things, in this class of tires, it’s a bit on the pricy side. A 15-inch model will set you back around $160 per tire, while Goodyear’s models are roughly $20 cheaper.

Should I buy the Michelin Energy Saver A/S?

The Energy Saver A/S is a tire that delivers premium performance, and there’s no denying that. Even though it may fall a bit short in some situations, those are in cases where you push the tire to its limits. It ticks all the right boxes as a touring tire, and if you can get over the noise levels on rougher surfaces, then there isn’t a reason why you should avoid it.

Yes, the price is a bit higher, but when you factor in the fact that the fuel consumption is better, something the Energy Saver A/S does very good, things seem to even out.

What Vehicles Will the Michelin Energy Saver A/S Fit?

Here’s a sample list of cars that the Michelin Energy Saver A/S will fit: