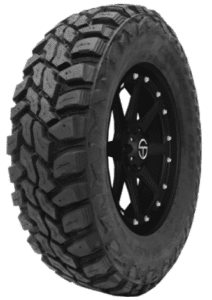 It’s no secret that off-road tires are becoming more and popular in today’s market. As the trend for trucks and SUVs increases, so do the need for tires that can drive in non-paved conditions. There are exceptions to this rule, mainly from people that need these types of vehicles for the extra room and drive them on the roads, in which case they go for the touring options.

For off-roading, the choice of tires is more or less settled between two options – all-terrain and mud-terrain. Based on the name, you can guess that the all-terrain tires offer a blend of on and off-road performance. The idea behind this type is to have a tire that can be driven in lighter off-road conditions, meaning that you will have to make some compromises.

Mud-terrain tires are the ones you’ll want to go for if you need something that can deliver the best off-roading experience. Even though they are drivable on the pavement, the best results can be witnessed in the most extreme off-roading scenarios.

The tire in question is the Mastercraft Courser MXT, which is the company’s most extreme off-roading option. Mastercraft is a company that falls under the Cooper brand, meaning that you’d be getting an American-made tire. These are some bold claims about its performance, so let’s take a look at how good the tire is.

What are the features of the Mastercraft Courser MXT?

Starting off with the flexibility in terms of usage, the Courser MXT is an all-season tire, which you can use in the summer and winter. To achieve this, the company utilized a special rubber compound capable of remaining soft in colder temperatures. 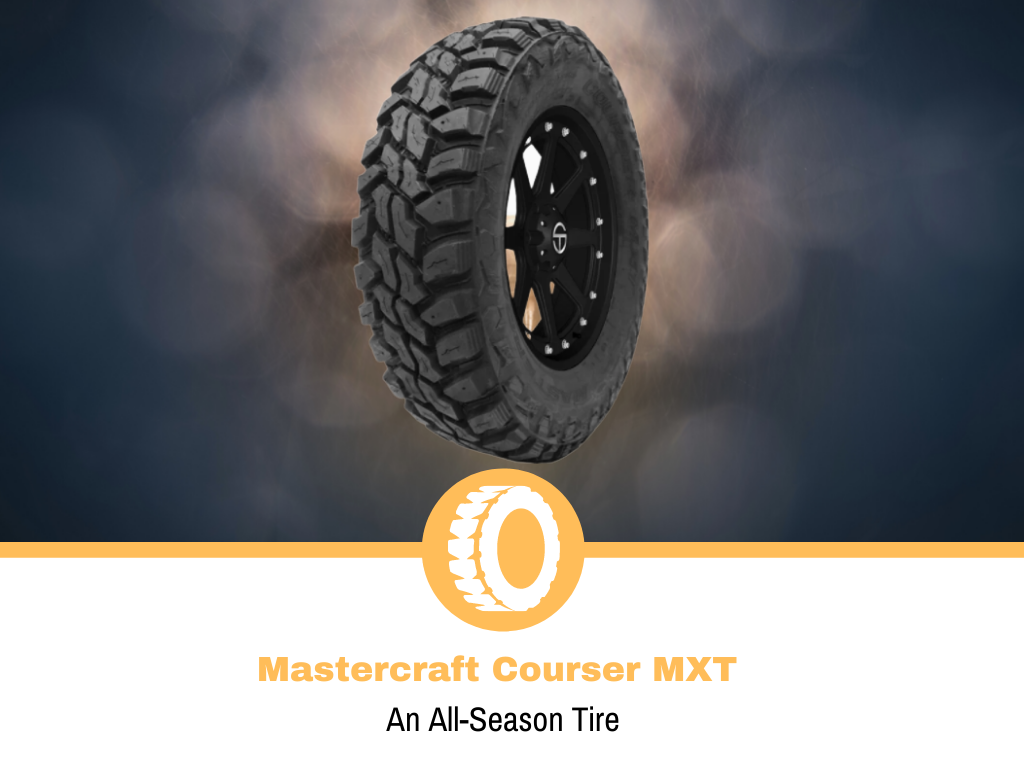 In those scenarios, snow and ice are a common occurrence, which is why Mastercraft prepared the Courser MXT for that. You have an M+S rating, meaning that it should fair well in lighter snow conditions. It’s disappointing not to see the 3PMSF rating, but on a positive note, the tire can be studded if you need that.

For road performance, Mastercraft designed the tread to have larger blocks, resulting in a bigger contact patch and better traction. In rainy conditions, the biting edges around the blocks should help improve the traction. You should also see gains from them on gravel roads or on snow. Heavy rain conditions are tricky, and thanks to the wide grooves, the Courser MXT should be able to evacuate water from beneath it with ease.

Like most mud-terrain tires, the Courser MXT features a self-cleaning technology. The company achieved that by widening the grooves so that mud or other debris wouldn’t get stuck. Around the shoulders, the mud-scoop design of the scallops enables the tire to provide more traction in muddy situations.

The performance on dry tarmac is a bit of a mixed bag with some positive and negative sides with an overall decent experience.

Starting with the positive are the grip and traction levels. The Courser MXT isn’t a tire that can be taken on a track, so keep that in mind. For the most part, there is a decent amount of both to provide you with a safe and reliable experience. Braking distances aren’t industry-leading, but they are better than most cheap tires.

On the negative side of things is how the tire handles. If you’re an enthusiast, you’ll instantly notice that the tire feels mushy, almost like a winter tire. It does respond, but it’s not as instant as with some of the other mud-terrain tires.

Performance in the rain is pretty good, and despite the lower price, there aren’t too many compromises, except for the handling.

Like in dry conditions, the Courser MXT isn’t the sharpest knife in the box but gets the job done. the sidewall flex is there, and the responsiveness is on the lower end of the spectrum, followed by the muted feel through the steering wheel.

As for the traction, the edges around the blocks are doing a decent job of enabling the Courser MXT to hook up. Getting too aggressive will lead to slipping, which isn’t the worst in this category. The tire doesn’t want to be forced in the corners, so I’d recommend taking it easy. For the braking distances, you will be getting some decent stopping power, something that the Chinese competitors lack.

Thanks to the wide grooves, the Courser MXT has pretty good aquaplaning resistance at the speeds that you’d normally drive with.

The Courser MXT has an M+S rating, so the winter performance is passable but a bit limited.

You can use the Courser MXT in light snow conditions if it isn’t too deep. There will be a usable amount of traction, and if you’re a bit careful, you can use it. For some more extreme situations, the tire can be fitted with studs, meaning that you’ll get better performance, especially on ice.

Considering that it’s not 3PMSF rated, the Courser MXT will struggle with deeper snow, at which point you’ll need to start thinking of getting a proper winter tire.

In terms of refinement, the Courser MXT doesn’t have much to show for compared with the premium options.

For comfort, the tire isn’t terrible, and combined with a softer suspension of a truck or an SUV; it should be fine. It can deal with bums relatively okay, and it will do a decent job of reducing vibrations from entering the cabin.

Noise levels aren’t on the lower end of the spectrum, but they’re not too bad. For the most part, the tires will be the loudest on the highway when driving at higher speeds. Around town, the Courser MXT is acceptably quiet.

As a mud-terrain tire, I was expecting excellent performance and the Courser MXT delivered on that, for the most part.

The lighter off-road conditions like gravel or mud pose almost no problem for the tire, and there’s enough grip to get the job done. The tire will struggle in deeper mud, which is expected, considering that it’s not a premium option. With that said, the self-cleaning technology is doing an excellent job of keeping the grooves clean of buildup.

The tire will struggle a lot in some more extreme situations, which is to be expected considering the price range. Rock crawling is doable, but the experience and performance won’t be on the level that you’d need.

Is the Mastercraft Courser MXT ideal for sporty driving?

Off-road tires are not suitable for sporty driving, and the same can be said about the Courser MXT.

The handling isn’t as dynamic as you’d want it to be, and with the lack of responsiveness and feedback, the tire will disappoint. On top of that, you won’t get as much traction or grip as you’d want to be able to push your car to the max.

Off-road tires, especially mud-terrain ones, rarely come with a warranty, and Mastercraft decided to follow the trend. The Courser MXT has no treadwear warranty, which isn’t a surprise. These kinds of tires are to be driven in extreme situations, meaning that manufacturers cannot claim how long they’d last.

Mastercraft Courser MXT Pricing: Is it worth the money?

The Courser MXT is a tire that is worth the money, but it’s not for everyone. Prices start from under $150, which is relatively cheap for a mud-terrain tire. Compared to the more expensive competitor from the same company, the Cooper Evolution M/T is almost $190.

Should I buy the Mastercraft Courser MXT?

Yes, but hear me out, it’s not a tire meant for everyone looking for an off-roader. There are a few considerations, mainly in terms of what you plan to use it for.

Even though mud-terrain tires are designed for off-roading, they can be usable on paved roads. The Courser MXT is a decent contender and seems to deal with everyday driving relatively well. You won’t get tons of grip and traction on dry and wet, but that should be crucial for most drivers. Snow performance is okay-ish, and the tire is usable in light snow, which you can take it up a notch by fitting studs to it.

The handling is the weakest point, and the tire is not as responsive as some of its competitors. Luckily it makes that up with a decently comfortable ride and acceptable noise levels.

In off-road situations, the Courser MXT is good enough for the occasional off-roader but will fall short in extreme situations. Yes, the tire is cheaper, and with that, you get to make some compromises, which is why you need to rethink if the tire will be good enough for you.

If you’re the type of person that does casual off-roading and you’re not too interested in the extreme stuff, then the Courser MXT will be fine for you. It will deliver decent performance at a lower cost. For more extreme conditions, I’d recommend going for some of the premium options for the best possible results.

What Vehicles Will the Mastercraft Courser MXT Fit?

Here’s a sample list of cars that the Mastercraft Courser MXT will fit: