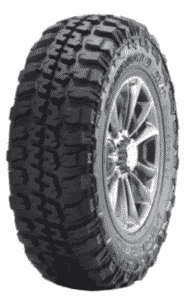 The ability to have a vehicle with multiple purposes is a bit rare. Sedans or hatchbacks are decently flexible, but they have a few limitations, one of which is crucial for today’s topic.

SUVs or trucks these days can be used on and off-road, along with the ability to load cargo or provide a comfortable ride. The crucial ability is these cars’ ability to drive on non-paved surfaces.

To take on an adventure trip away from the roads we use, you need two things – a car capable of that and a proper set of tires.

In the off-road category, there are multiple types of tires capable of tackling these terrains. Some options offer a balance between on and off-road performance, but the ones I’ll be talking about in this review are mud-terrain ones.

These are the type of tires designed for the most extreme conditions. Despite being usable on the roads, their primary application is off-roading.

The tire industry has plenty of models in this category, and the one I’ve chosen for today is Federal. This Taiwanese brand offers budget-oriented tires, which is the case with the Couragia M/T. It’s a mud-terrain tire designed for the most extreme conditions to deliver maximum performance in any off-road situation.

Considering the claims from Federal, can the Couragia M/T deliver on the promised performance?

What are the features of the Federal Couragia M/T?

The main feature of any mud-terrain tire is the tread design, which gives its properties in off-roading conditions. Federal designed the Couragia M/T with an aggressive pattern, resulting in the tire performing excellently in mud, slush, and snow. 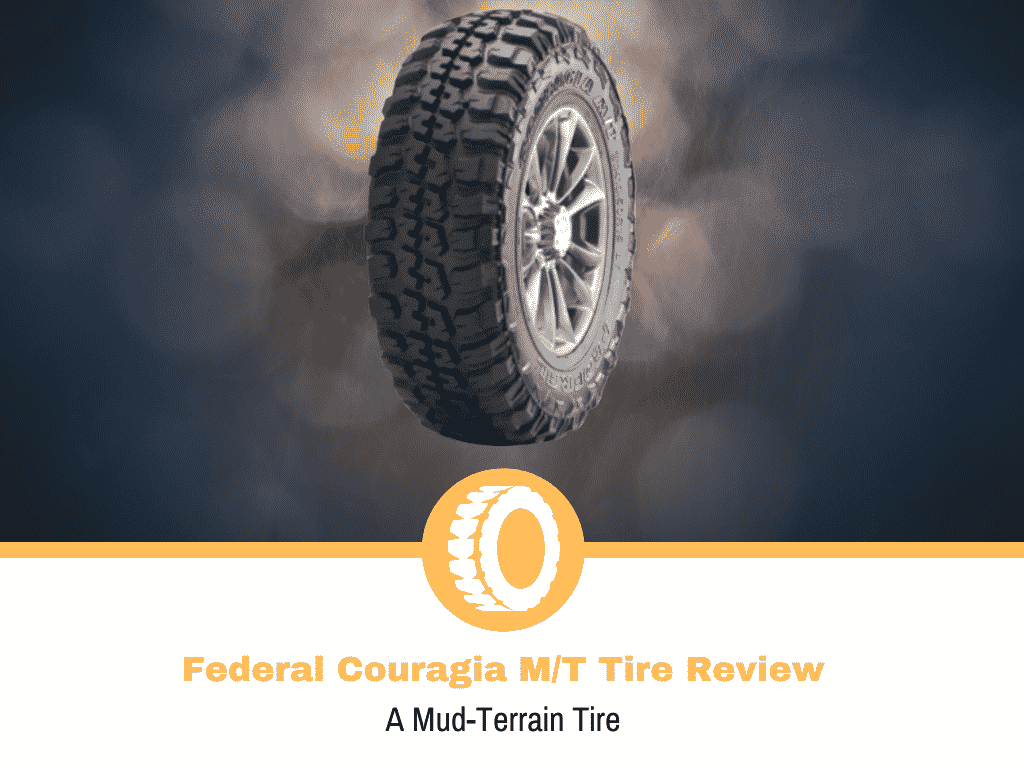 Off-road tires need to be tough and durable, and the Couragia M/T looks like it can deliver on that front. The tire’s shoulders are reinforced and strengthened to ensure that it doesn’t get damaged from rocks. As a bonus, the shoulders can also help improve traction in specific off-road scenarios.

The durability continues to be seen in the compound and internal construction. Both work in combination to ensure that the tire doesn’t get damaged from sharp rocks or when deflated for rock crawling.

Federal equipped the Couragia M/T with a feature called Sloped Radius Gradient or SRG for short. The idea behind this technology is to provide stiffness to the tread, resulting in a more stable and well-mannered tire.

In addition to that, the Couragia M/T also features incremental edges around the blocks. This feature serves the purpose of enabling the tire to keep the tread clean of mud, sand, or dirt buildup. The goal of this is to provide maximum performance at all times.

The Couragia M/T isn’t a tire designed for the road but manages to deliver acceptable performance in some areas.

On the positive side of things, the Couragia M/T delivers decently good levels of traction. Even though the tire will slip during aggressive acceleration, it won’t be as bad as other cheaper options. On the other hand, Grip levels are usable but don’t allow you for a lot of breathing room. The tire will be fine in everyday driving, as long as you don’t push it too much.

The handling is probably the weakest part of the Couragia M/T. Mud-terrain tires aren’t known for being the most responsive ones, but this one seems to perform a bit worse.

Performance in wet conditions takes a nosedive, reaching a point where it’s usable enough but far from some of the other tires in this category.

The Couragia M/T lacks some of the micro spies that other mud-terrain tires, so the traction and grip levels are very low. You can feel the tire struggle to hold on to the road, even when you’re not pushing it. This also means that the braking distances aren’t particularly short.

This also makes the tire behave a bit uneasy and lacks controllability in these conditions.

One area where the Couragia M/T proves to be decent is in the aquaplaning resistance. It’s far from the best in this class, but considering the rest of the wet performance, it’s not too bad in this regard.

Mud-terrain tires are generally pretty good in light snow conditions thanks to the aggressive tread design, and the Couragia M/T is no different.

It can handle unpacked snow quite well and, combined with the decent traction, makes for a very usable tire in these conditions. Even though it’s not on the same level as a proper winter tire, as long as the conditions aren’t harsh. It can even be driven on packed snow with slightly more limited traction but is still usable in some conditions.

With that said, ice is the Couragia M/T’s greatest enemy, which is to be expected. There is very limited traction, and the braking distances are pretty long to the point where they aren’t safe.

Tires designed for off-road are not the most refined ones, and the same goes for the Couragia M/T.

The levels of comfort are generally poor as the tire delivers a pretty stiff ride. It doesn’t smooth out road imperfections as well as some of its rivals, and you will notice plenty of vibrations when you hit a pothole.

As a tire with such an aggressive tread pattern, the Couragia M/T is far from a quiet tire. The noise levels are pretty high, even for a mud-terrain tire. In this regard, the Milestar Patagonia M/T is a far better performer.

The Couragia M/T is designed as a mud-terrain tire, and as such, it performs excellently in certain conditions.

You can expect to have excellent performance, mainly muddy and sandy conditions. The tread pattern combined with the deep grooves means that the Couragia M/T can dig in and provide plenty of traction. In this area, it’s almost as good as something in the Hankook Dynapro MT2 or Falken Wildpeak M/T range.

In terms of the other off-road conditions, the Couragia M/T is not the best. The rubber compound is a bit softer than the competition, so the handling suffers. Traction and grip aren’t an issue, but the responsiveness and stability are not terrific.

Rock-crawling is not a problem, at least in terms of the overall performance. The Couragia M/T can deliver a decent amount of traction, but the chances of damading it is higher due to the softer compound.

Is the Federal Couragia M/T ideal for sporty driving?

As a mud-terrain tire, the Couragia M/T isn’t primarily designed for sporty driving. With that said, even when compared with other off-road capable tires, this one still performs far worse.

On the one hand, you are very limited with the grip and traction levels, meaning that you won’t be able to push the tire too much.

The second problem is in the handling department. The Couragia M/T is among the least responsive tires in this category and combined with the softer sidewall, you shouldn’t expect to have fun on a twisty road.

Mud-terrain tires are known for coming without a warranty, so this isn’t a drawback of the Couragia M/T. having no treadwear warranty puts it in the same basket as its premium counterparts like the Goodyear Wrangler MT/R with Kevlar.

Federal Couragia M/T Pricing: Is it worth the money?

Federal is a brand that offers affordable tires, and the Couragia M/T falls in that category to a point. Prices start from around $180, which is a more affordable option than the General Grabber X3 or the Firestone Destination M/T2.

Should I buy the Federal Couragia M/T?

Even though there are some areas of the Couragia M/T that are good, it’s still a tire that I wouldn’t recommend.

The performance on the road is below average for this category, making it a poor performer. In dry conditions, it’s pretty usable with acceptable amounts of grip and traction. The Couragia M/T’s weakest performance is in wet conditions, where things are quite limited. Plus, in both cases, you have a tire that isn’t the best in terms of handling.

Snow performance is a bit better, and you can use over packed and unpacked snow, as long as it’s in lighter conditions. Anything more than that and the tire will struggle, which is to be expected.

As a mud-terrain tire, the Couragia M/T is excellent in some off-road conditions. Performance in mud and sand is excellent, and the tire can deliver plenty of traction. On the negative side of things, the tire delivers decent performance over hardpacked surfaces, but with not the best handling in the market.

Another area that the Couragia M/T isn’t particularly good is refinement. Comfort levels aren’t as good as most of its competitors, while the noise levels are a bit on the higher side.

Like most mud-terrain tires, a treadwear warranty isn’t available, which makes the Couragia M/T an even contender in any category. The price is affordable, but it doesn’t seem like a good bargain when you consider the performance.

The Couragia M/T is positioned as a cheaper option than its competitors, but with that, you are getting a worse performance. That is the main reason why I wouldn’t put it as the number 1 choice in terms of a mud-terrain tire.

What Vehicles Will the Federal Couragia M/T Fit?

Here’s a sample list of cars that the Federal Couragia M/T will fit: