Alloy vs Aluminum Wheels: Is there a Difference?

In most cases, we use this site to talk about tires, which is to be expected. We have a hunger for tire information, pun intended. Every now and then we make some exceptions, and this article is one of those. 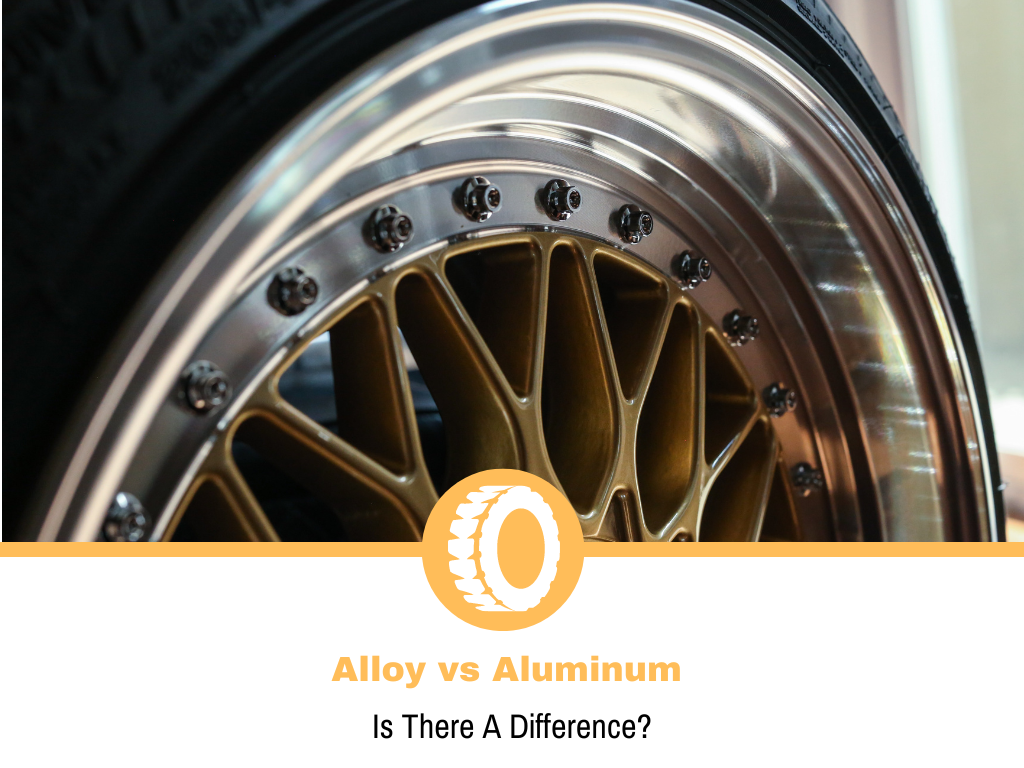 There are many misconceptions in the automotive industry. Sometimes people get confused about what things mean because of the terminology.

The material from which wheels are made is one thing that people mix up. In most owner’s eyes, there are steel and alloy wheels, so they don’t ponder too much about any other types.

In some ways they are correct, but the problem occurs when we talk about alloy wheels. A common question that hovers around the internet is what the difference between alloy and aluminum wheels is.

Spoiler alert, it’s a common confusion, and the answer isn’t as simple as you may think.

Technically, alloy and aluminum wheels are the same thing. Aluminum as a material is light, but not hard enough to handle the weight of the car and the forces applied to it in normal driving scenarios. To remedy this, manufacturers use an aluminum-based alloy to produce lightweight and strong wheels.

How Are Aluminum Wheels Made?

For the sake of this guide, I’ll use the term aluminum and later on in the article I’ll talk about other types.

As I mentioned in the previous section, aluminum wheels are made from a mixture of multiple elements. In most cases, you’re looking at two materials, one of which is aluminum. As for the second, it depends on the manufacturer and the blend it uses. The popular choices include nickel, magnesium, or titanium. 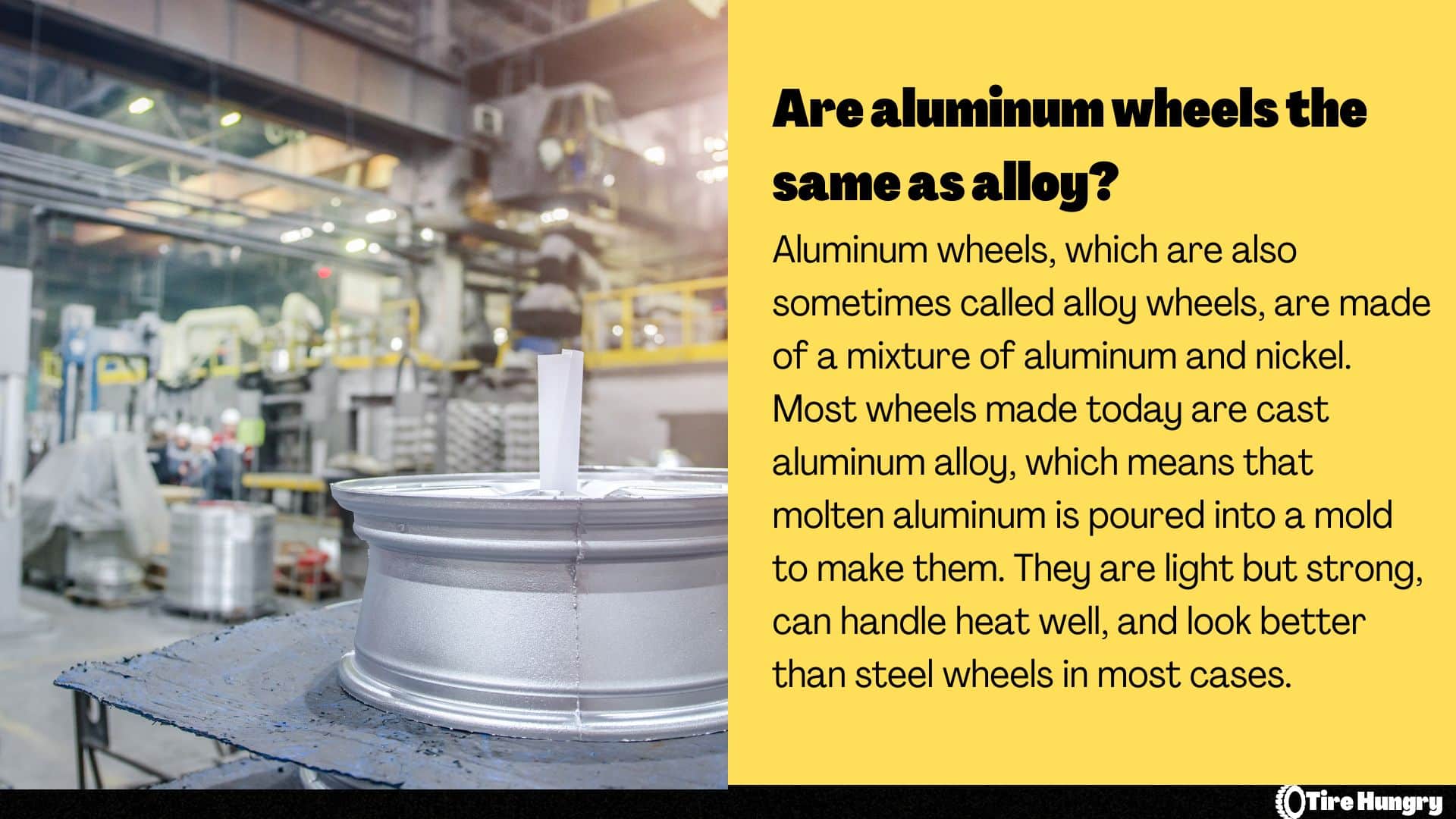 The process starts by taking aluminum blocks that go into a furnace. They are melted for 25 minutes at a temperature of 1328 degrees Fahrenheit, after which it gets poured in a mixer for processing.

Before additional elements are added, manufacturers inject argon into the aluminum. The goal of is to remove the hydrogen, increasing the density. Once this part is completed, the additional elements like magnesium, nickel or titanium are added into the mix. Until this point, the process is the same. Things change when it comes to “forming” the wheels.

To be fair, there are differences in how the alloy is prepared for each fabrication type. Despite that, the mixture is pre-prepared before the fabrication process starts. Also, preparing the mixture is something that’s used with cast wheels, which I’ll explain in a second.

There are multiple types of fabrication processes that make alloy wheels. Each one has its own strengths and weaknesses, and this also means the price will vary. 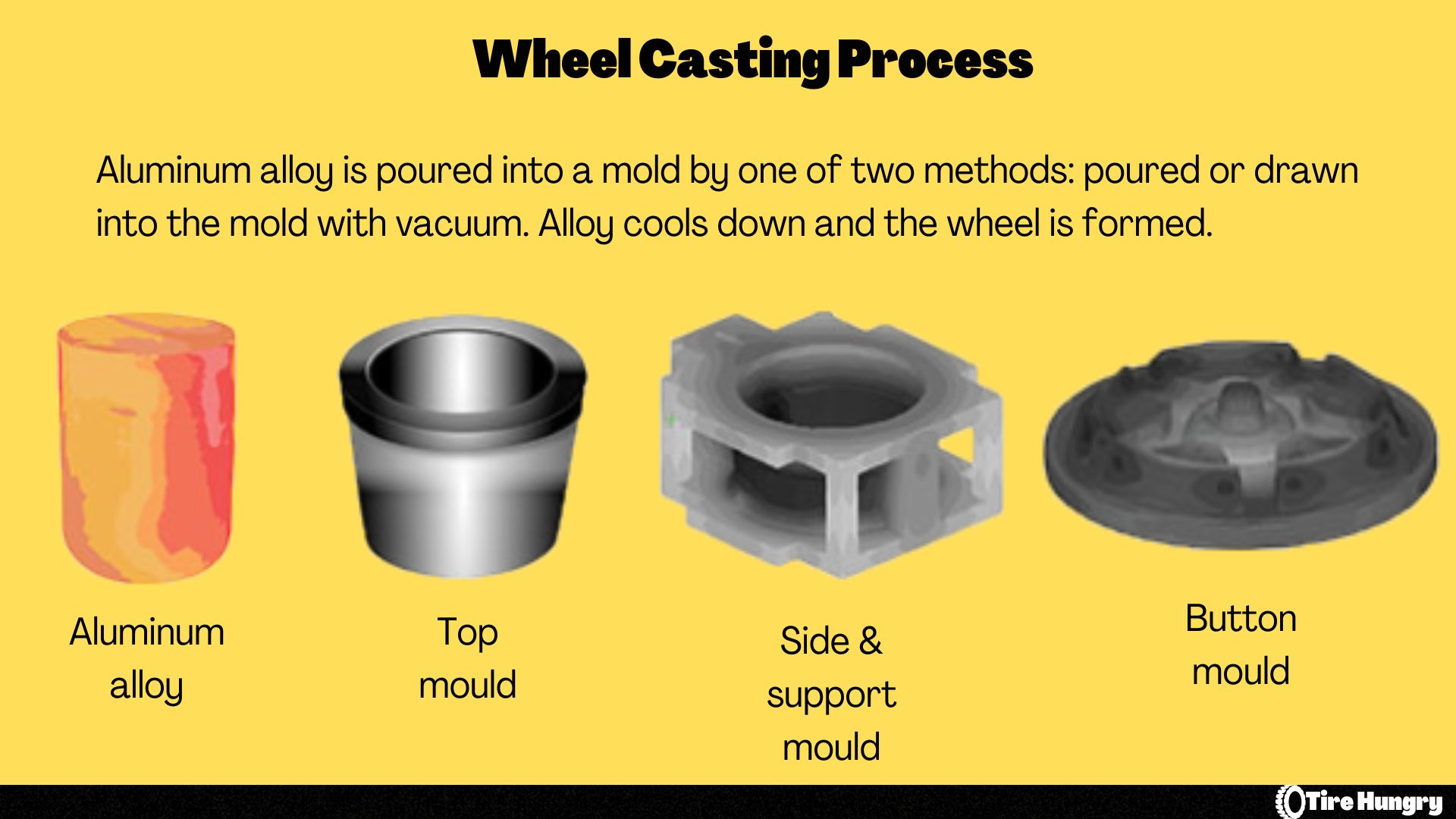 Casting is a common fabrication method for wheels and gravity casting is the oldest one. Manufacturers are using this since the 1920s and considering the lack of technology in that era, it worked well. It’s the most affordable way to make wheels.

Liquid alloy is poured into a mold and left for gravity to do its job. Once the liquid has hardened, technicians can take out the wheel and work on the next one. The wheel won’t come out perfectly, so some finessing is required.

Next up, we have low pressure casting, which involves using a bit more advanced technology. As a result, you’re looking at a more expensive fabrications process.

This process also uses a cast or mold, but instead of using gravity, manufacturers go for pressurized gas mixture or air. The pressure is applied from below the mold and the liquid fills up the cast. A technician can change the pressure depending on the situation. The pressure is held until the liquid hardens. As for the remaining one, it goes back in the tank for later use. A technician removes the wheel, inspects it and starts preparing the rig for the next one.

In many ways, the high pressure die casting process may seem identical to the low-pressure one, but it’s not the same. Yes, pressure is used in both, but the way it’s used is the main difference.

Like with the previous manufacturing process, pressure is used to “shoot” the liquid alloy into the cast. Unlike the previous method, manufacturers use high pressure, so the time to complete a wheel is shorter. The advantage is that with this method, a wheel can be prepared quickly, usually taking less than a minute to cast and harden. 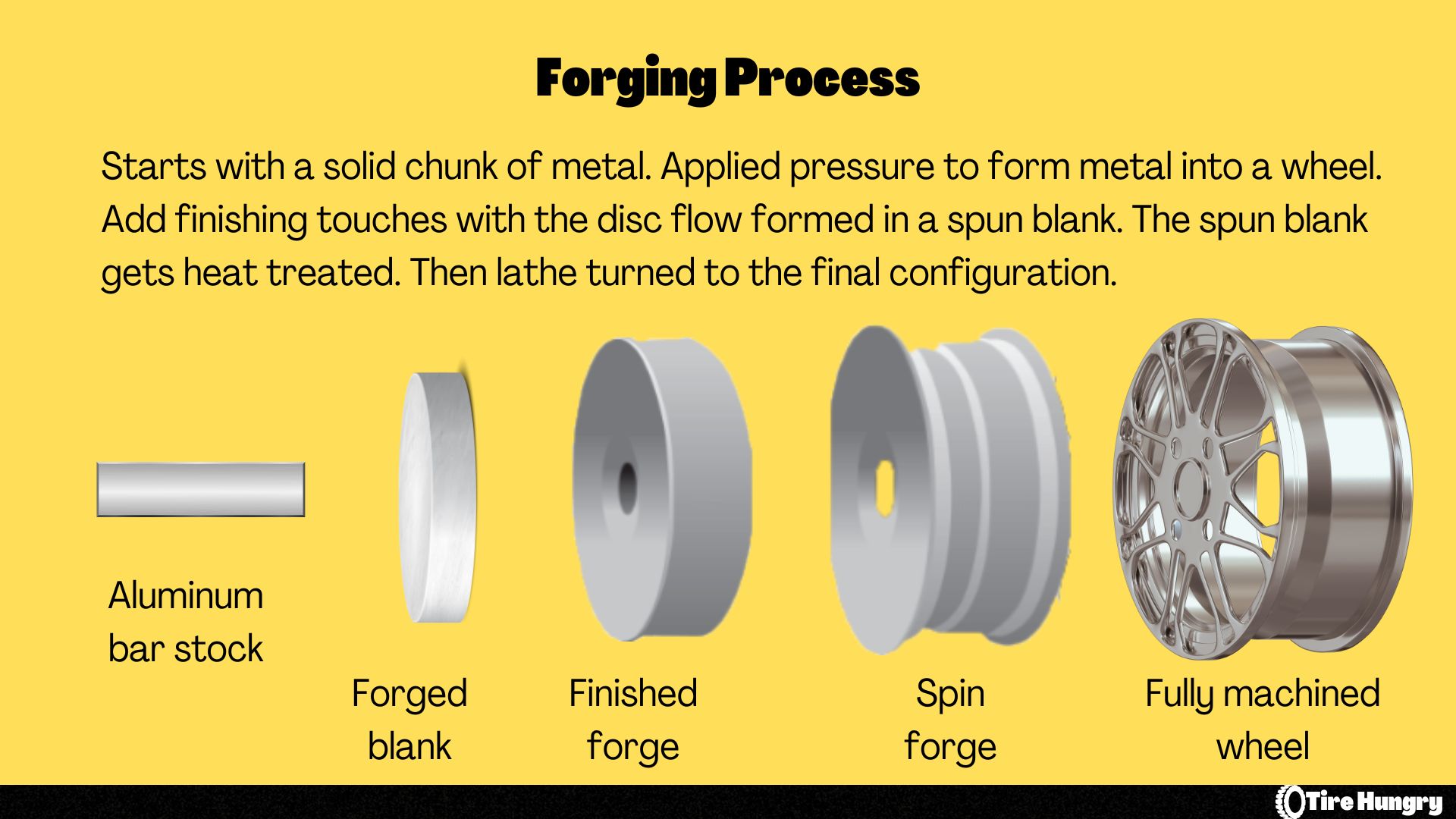 Moving away from casting, the second type of manufacturing is forging. Unlike the earlier processes where the wheels started as liquid, here, they start their life as blocks.

Machines and technicians work together to make these blocks into wheels using heat, pressure, and many other techniques and tools. The primary advantage of this process is strength and weight. Forged wheels are much stronger than forged ones, but are also lighter. This doesn’t come without some drawbacks, with price being among the biggest one.

The last process of making wheels is assembling. This process is usually used for custom wheels or some very rare car models. In essence, this process involves fabricating the wheel from multiple pieces. Most manufacturers make a wheel from 2 to 3 pieces.

Each piece of the wheel is forged and a technician later assembles the wheel, ensuring that it remains structurally sound to be driven. This is the most expensive process, because it involves forging and then assembling. It’s the main reason you won’t find a set of assembled wheels on your Corolla.

Are There Other Types of Alloy Wheels?

So far, I’ve talked about alloy wheels made from aluminum, mostly. Despite being the most popular in the market today, there are other types of materials used for wheels.

In the olden days of racing, a common phrase used was mag wheels, which is short for magnesium wheels. Several incidents in motorsports, including the horrific one at Le Mans in 1955, led to magnesium being banned because of its flammable properties. In recent years, magnesium wheels made a comeback to the market. 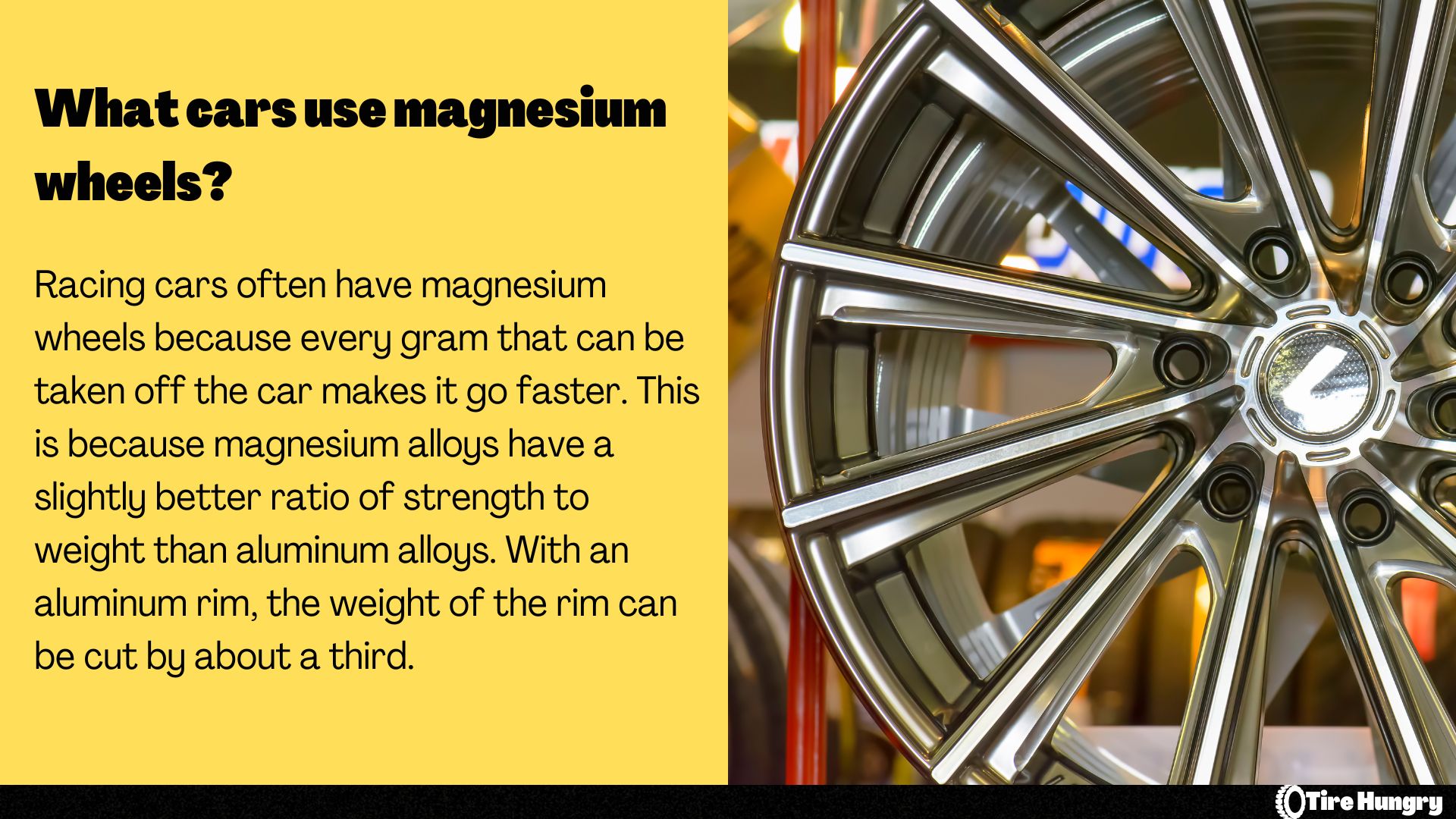 To remedy the problem with flammability, manufacturers make magnesium alloy and mix it with calcium in most cases. This reduces the risk, making things safer.

Magnesium alloy wheels were popular in racing because of their weight. As good as that sounds, it doesn’t come without some drawbacks.

The first thing that comes to mind is the price. Magnesium isn’t a “cheap” material, so a set of wheels won’t be as affordable as aluminum alloy ones. Next up is the shelf life, and yes, there is one.

If you come across some second-hand magnesium wheels, check the manufacturing date. The material is prone to corrosion, so after a while, it will compromise the integrity of the wheel. Driving with a structurally compromised wheel is dangerous, so I wouldn’t recommend it. As a general rule, magnesium wheels shouldn’t be used if they’re older than 15 years.

Speaking of exotic materials, the modern solution to magnesium is carbon-fiber. Many manufacturers offer these kinds of wheels for some of the performance oriented models, like the 911 Turbo S, GT500 and many more. 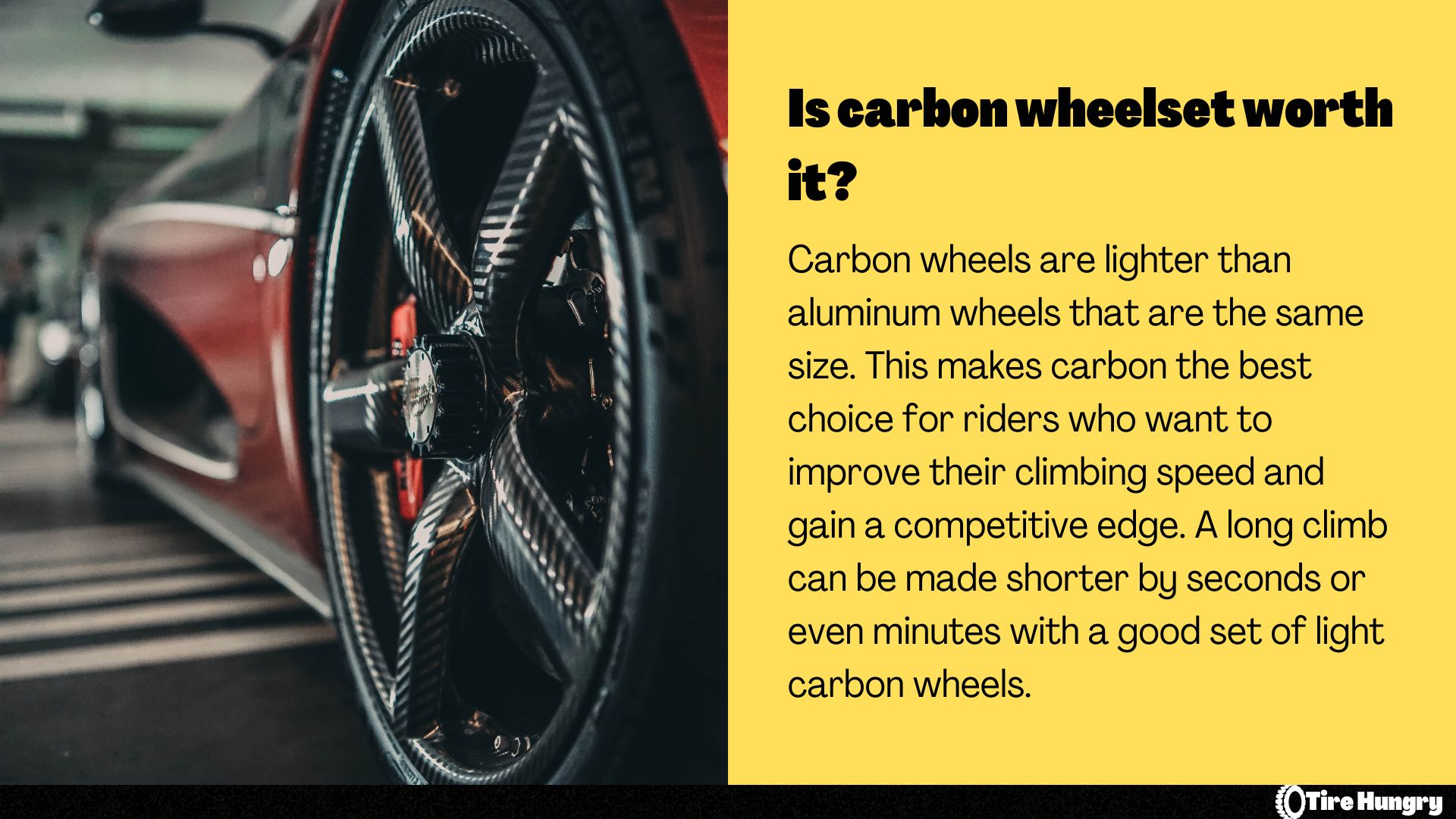 There are many advantages to using carbon-fiber wheels and they revolve around strength and weight. The wheels are much lighter, reducing the unsprung mass. At the same time, they can handle some beating on a track. Keep in mind that I said “on a track”, because for road use, we see some drawbacks.

The material is strong, but it’s also brittle, so a harsh hit on a large pothole can damage it. This is because it’s not as flexible as aluminum or magnesium alloy, so cation is advised here. Price is also something worth mentioning. Like magnesium, it’s an exotic material, so it’s not cheap.

With tons of options available on the market, it’s understandable why you’d be confused which one is the right option for you. This also adds to the confusion with the terminology.

Alloy wheels are the general term for the nice shiny wheels you get, as opposed to the steel ones. Aluminum is one of the base material used for alloy wheels and is the most common one. It’s relatively inexpensive and the manufacturing process is cheap.

With that said, there are expensive manufacturing processes for making aluminum alloy wheels. There are also more exotic materials, making things even more expensive.

Regardless of the type of material or manufacturing process you’re looking at, there will be some pros and cons. At the moment, cast aluminum alloy wheels are the best middle-ground for most. They are affordable, lighter than steel wheels and durable enough.

Going for other types means that the list of advantages and disadvantages changes. Therefore, it’s important to know all aspects before deciding what kind of wheels to get.