Living in an era where you have a car for every occasion is a nice thing. Most people get the type of vehicle based on their needs, and the market aims to cover as many needs as possible, which is why we have multiple types of vehicles today. As you know, a car is designed to deliver its performance as long as it’s fitted with the right set of tires. 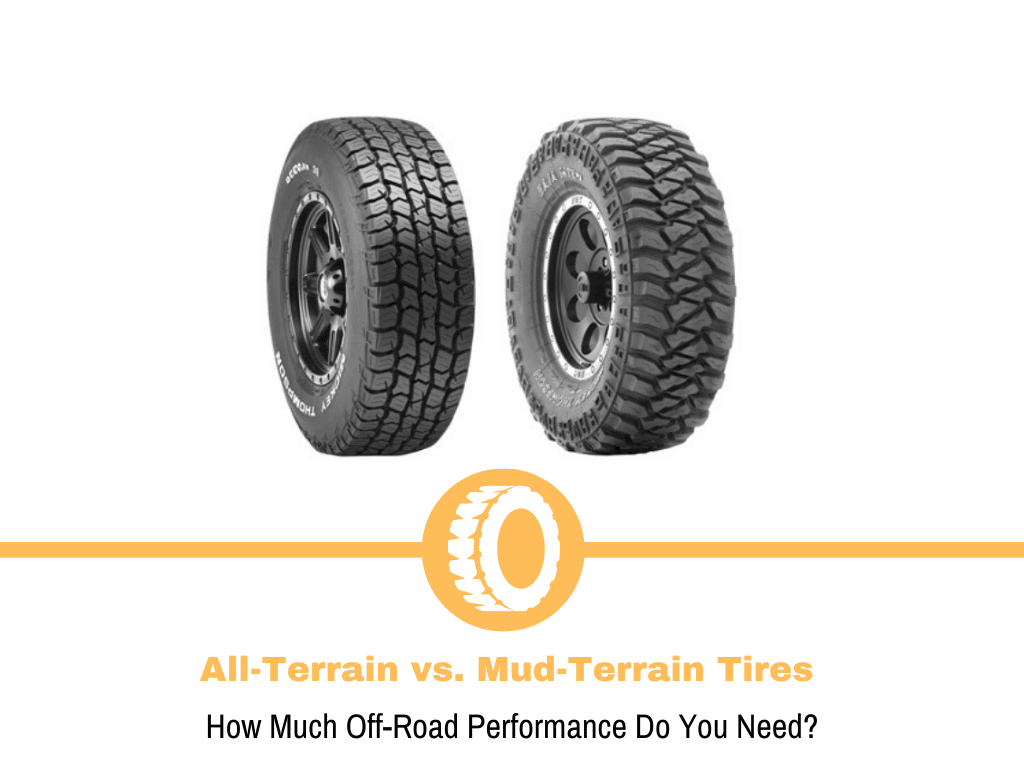 Different driving conditions require different types of tires. Most of us drive on paved roads, so we’re looking at performance or touring tires, which are the more common options on the market. On the “less common” side of things, we have tires designed for off-road use, in some cases at least.

Off-road capable vehicles aren’t something new, just as the tires for them aren’t something introduced to the market yesterday. There are primarily 2 options in this segment, with the 3rd one still being in its infancy.

In the left corner, we have all-terrain tires, while in the right, we have mud-terrain ones. Both types are designed for off-road use but cover different types of drivers. The 3rd type is a middle ground between them, but I won’t be discussing that today.

Considering that all-terrain and mud-terrain tires are considered off-road options, it’s natural for some people to get them confused. To set the record straight, in this article, I’ll compare both types and outline which one should be the best option for you.

All-terrain tires, as you can guess from the name, are tires designed for multiple terrains. It means that you can drive on paved roads and in off-road scenarios. It’s a blend of both situations, and for most people, it should be enough, despite them not being the best at either situation.

Mud-terrain tires aren’t designed exclusively for mud. These tires are primarily for off-road use as they can deliver the best possible performance regardless of which conditions you’re driving in. With that said, they can be used on paved surfaces, but the performance will be limited.

What are All-Terrain Tires?

As a concept, all-terrain tires are relatively new on the market. They were conceived to combine on and off-road performance in a single package. The result of this is a tire that will deliver decent performance on the road and won’t be poor in off-road conditions. You can think of it as a combination between a highway and an off-road tire.

While this looks good on paper, things aren’t perfect. Tires that can do multiple things usually aren’t the best in either of those, which is to be expected. All-terrain tires are decent performers on paved surfaces, and the refinement levels are good, but they aren’t on the same level as highway tires.

The same goes for off-road driving as well. All-terrain tires are designed to be driven in off-road conditions, but the performance won’t be as good as a proper off-road tire. Overall, you’ll be getting some good performance in lighter conditions, like dirt roads, mud, or maybe even a bit of sand. in harsher conditions, these tires will struggle and shouldn’t be used too frequently for the most extreme conditions like rock crawling.

Manufacturers manage to combine both conditions into one tire, mainly with the tread pattern. All-terrain tires have a more aggressive pattern than highway tires but less than off-road ones. This may cripple the performance in off-road conditions but improves road performance.

In most cases, with all-terrain tires, you’re also looking at some winter performance. Most are M+S rated, so they should deliver usable performance in lighter winter conditions. You may find some with a 3PMSF rating, so you can get a bit more out of them.

All-terrain tires are a blend of two different types of tires, so while they may not be the best, having flexibility is what makes them so popular with most people.

What are Mud-Terrain Tires?

Mud-terrain tires, unlike all-terrain ones, are designed for one thing in mind – off-roading. Despite the name, these aren’t good only for muddy surfaces and are ideal for other off-road scenarios like hard-packed surfaces, sand, rock crawling, etc.

There are two things that make a good mud-terrain tire: the pattern and internal construction. With these kinds of tires, you’re getting a very aggressive pattern that serves multiple purposes. One of those is for softer surfaces like mud so that the tires can deliver traction in conditions where other types would struggle.

Next up, we have the compound and the internal construction. Mud-terrain tires operate in non-paved conditions, so they need to be durable to withstand that kind of torture. As a result, most have cut and chip resistance compound, which keeps the tire intact and safe from sharp rocks which could puncture a regular tire.

The internal construction is reinforced, something you won’t find with other tire types. Off-road tires need to be aired down for rock crawling, so it’s crucial for the tire to withstand getting squashed and live to drive another day.

Considering that mud-terrain tires are designed for off-road use, their road performance is poor. Yes, you can drive them on paved surfaces, but you shouldn’t expect marvelous levels of performance. Also, due to the aggressive tread pattern, the noise levels will be much higher when compared with other types of tires.

Differences Between All-Terran and Mud-Terrain Tires

Right off the bad, it’s understandable why there would be some confusion, as both tires are designed for off-roading. This is where the similarities end and the differences begin.

The first major difference is in terms of the off-road performance. While both can be driven in those conditions, the performance won’t be the same. All-terrain tires don’t have a too aggressive tread pattern, meaning they will struggle in the harshest off-roading conditions. On the other hand, Mud-terrain tires have a far more aggressive pattern, enabling them to provide better performance. On hard-packed surfaces, the differences aren’t too great, but in mud or sand, you will notice why a mud-terrain tire is a better choice. Thanks to the aggressive tread pattern, it can dig in and offer better traction, unlike an all-terrain tire which can struggle a bit.

Another key difference is the internal construction, which favors the mud-terrain tire in off-roading scenarios. I wouldn’t call all-terrain tires poor and with weak construction, but they aren’t designed to be deflated and driven like that. Mud-terrain tires, on the other hand, will have no problem getting aired down.

Moving on to road usage, this is where we see another huge difference between these two types of tires. Since all-terrain tires are also designed for road use, you will be getting some decent performance out of them. You should look at them as touring tires, as they are acceptably well refined, and the performance is pretty good. Mud-terrain tires aren’t so good. While you can drive them on the road, the performance is barely considered passable. They are safe, and you won’t feel like you’re not in control, but you’ll need to be mindful of the limitations. Refinement is their biggest hit, as they can get quite noisy and harsh on the road.

When Should you Get All-Terrain Tires?

All-terrain tires offer a blend of on and off-road performance, so they would be a good choice if you need both. For the most part, these kinds of tires are suitable for SUVs that have some off-road capability. Taking this route ensures that you can use your vehicle on the road and off it. With that said, there are some things you should be aware of.

Due to what all-terrain tires represent, don’t get your hopes up about superior off-road performance. Sure, you can fit them on a Jeep Wrangler Rubicon and use it in those conditions, but not in all of them. Anything from dirt roads to shallow mud patches will be fine, and you won’t feel like you need more. In harsher conditions like deeper mud, the tires will struggle more, and your chances of getting stuck increase.

For rock crawling, I’ve seen people getting some performance out of all-terrain tires, but it’s a risky move. The first problem is that the tires won’t withstand too much abuse, and damage can be imminent. Next up is the performance, which won’t be up to your standard if you’re a hard-core off-roader.

Road use is what all-terrain tires are designed for as well, so if you need that, they can be a good choice. The performance is decent, and combined with the refinement, they can make for a good daily driver. With that said, if you drive them back to back with highway tires, you’ll notice that they won’t perform on the same level.

Overall, all-terrain tires are a good choice for people looking for combined on and off-road use. You will be missing out a bit in both situations, but that shouldn’t be a problem for most people. There are dedicated tires for better performance in either situation, so choose according to your needs and preferences.

When Should you Get Mud-Terrain Tires?

The second type of off-road capable tire is the mud-terrain one, and you should choose it only if you’re after the best off-road performance. It means that you’d be fitting these to a proper off-road capable vehicle, which the Jeep Wrangler Rubicon is.

In general, mud-terrain tires are excellent in any off-road condition, so you won’t be sacrificing performance. While there will be some performance differences between some models, overall, you can use these kinds of tires for anything from light off-roading on some gravel roads all the way up to rock crawling.

Having a tire with reinforced internal construction like mud-terrain ones have means that it will handle this abuse and won’t get damaged as easily. You should be looking for at a tire from this category if you often do rock crawling or driving in deep mud and don’t want to have traction issues.

At the end of the day, it all comes down to the type of vehicle and how you use it. Smaller SUVs aren’t the most capable off-roaders, so mud-terrain tires may not be a good option. On the other hand, there’s no shame in fitting all-terrain tires on something that can climb a mountain, as long as you don’t need it to do that.