Why Do Semis Have Spikes On Their Tires? (2022 Updated)

Spikes found at the hub of semi-trucks can be daunting to smaller vehicles passing through. These shiny and pointy metals look like they came right out of a Mad Max or Death Race film, ready to shred into a passing car’s body panels the moment it comes close enough. In reality, these spikes have nothing to do with damaging vehicles in the first place. 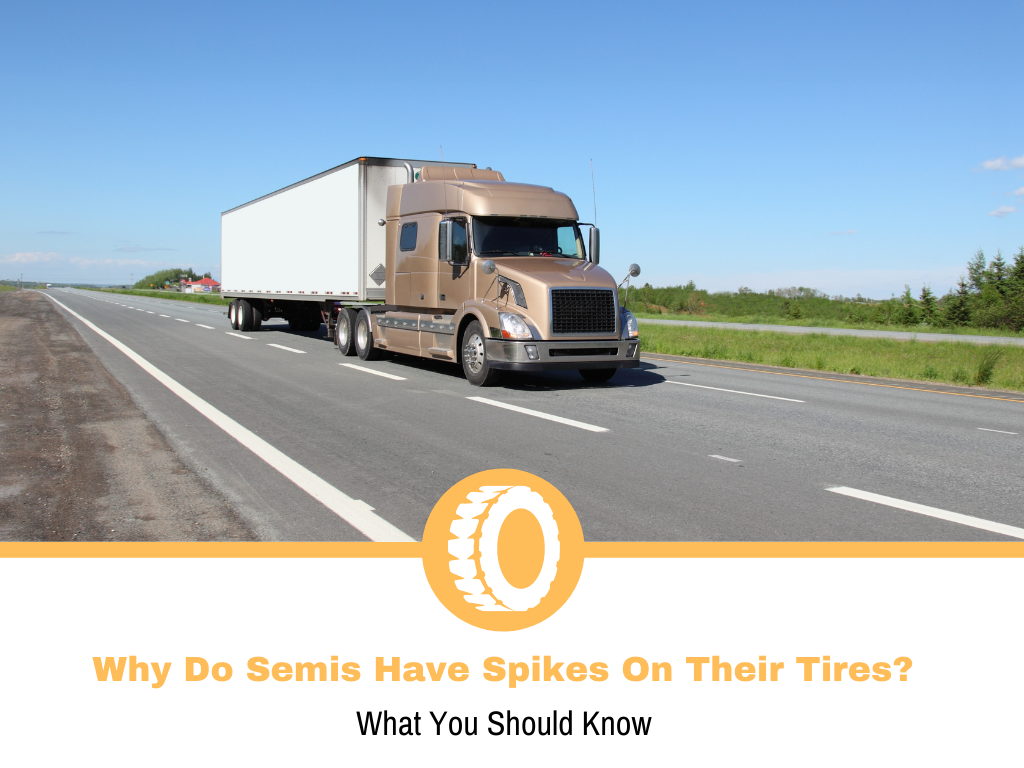 The spikes poking out at the wheel hub of semi-trucks are really lug nut caps. They’re designed to draw your attention and discourage you from approaching the truck’s ‘No-Zones’ or blind spots. Also, they protect the lug nuts from elements such as water, snow, which results in premature corrosion.

To realize that these spikes promote safety, for truck drivers and smaller vehicle drivers alike, instead of instilling fear and intimidation is an understatement. Below we’ll discuss why do semi-truck drivers choose to install spikes, their safety hazards, and lastly, the legal situation surrounding the issue of owning them.

Purpose of Installing Spikes on Semis

Spikes that poke out of semi-trucks are not installed to intimidate other smaller vehicles. They have been installed by drivers primarily to warn them not to get too close or an accident will likely happen. These spikes also protect the lug nuts from premature corrosion and damage brought by elements. Lastly, they bring an aesthetic and distinct character to the truck.

Protects the lug nuts against the elements

Spikes are used by many truck drivers to protect the lug nuts from premature wear caused by road grit and debris, as well as corrosion from rain or snow. Also, the spike’s design is remarkably strategic in flinging dirt, ice, and other debris away, preventing possible build-up on the spike and the lug nut beneath. Lug nuts may break free if they are not properly protected, posing a hazard to the stability of the vehicle.

The no-zone is the region around trucks when vision is restricted or non-existent. Sadly though, car accidents dealing with trucks are frequently caused by poor visibility. So many truck drivers choose to install spikes because these encourage other drivers on the road to be vigilant enough around trucks and keeping a safe distance.

We have to consider that semi-truck drivers spend most of the day or even weeks behind the wheel. So it will be no surprise if they will treat their trucks not just their workplaces, but also as sacred as their second home. And like how we decorate our homes and our personal workspaces, semi-truck drivers also do the same, from bumper to bumper, or in this case, by installing lug nut covers with an edgy appearance.

Are Spikes on Semis Legal?

For most states, the use of spikes on semis is not entirely illegal, tolerated, nor discouraged. However, some states, like the recently passed law in Hawaii, specifically mention ornamentations, lug nut covers included, that extends at least four inches from the wheel rim that may cause injury or property damage, as a ‘dangerous wheel’ and therefore, subject to regulations.

On the other hand, states like Washington prohibit wheel nuts, hub caps, or wheel discs that extend outside the body of the vehicle “when viewed from directly above”. So whether the spikes don’t stick out as far as four inches like in Hawaii, these accessories are still unacceptable.

Driving close to semi-trucks on the highway with spikes on their front wheels can really cause an uncomfortable ride, as the spikes look intimidating no matter what angle you’re looking at. But the truth is, tire spikes aren’t entirely dangerous. They may appear frightening as if they are ready to rip your automobile apart, but they are unlikely to do anything more than leaving an ugly scratch on your car.

The spikes are composed of weak plastic or thin metal, and if they come into contact with another vehicle, they will just break off easily. Then, it will produce noise that serves as a warning to other drivers that they are dangerously near to the semi-truck, giving them time to change and move to a safer location. However, in the case of pedestrians, and folks riding on bicycles or motorcycles, these may pose a legitimate hazard as the spikes will likely have direct contact on their bodies.

Is Liability Affected by Truck Tire Spikes During an Accident?

Even though the purpose of getting spikes is to warn off other vehicles from getting too close to the rig, they will be of no value if the truck driver who put them still fails to drive responsibly and crashes to other vehicles. In case that a semi-truck sideswipes you, the driver has no right to blame you just because you didn’t detect the tire spikes.

No device or accessory will ever prevent negligent and irresponsible drivers from getting into accidents. However, having spikes on the front wheels of semis is a good start to let them think twice about their limitations. In turn, these not only bring protection to the semi’s wheel component, but these accessories can also save lives.