Spare tires, or fifth wheels, as some may call it has been around since the pioneering ages in the automotive industry. Formally introduced by Walter and Tom Davies in 1904, they were the brilliant answer to early driver’s worries abut what to do when their tires got punctured while driving. 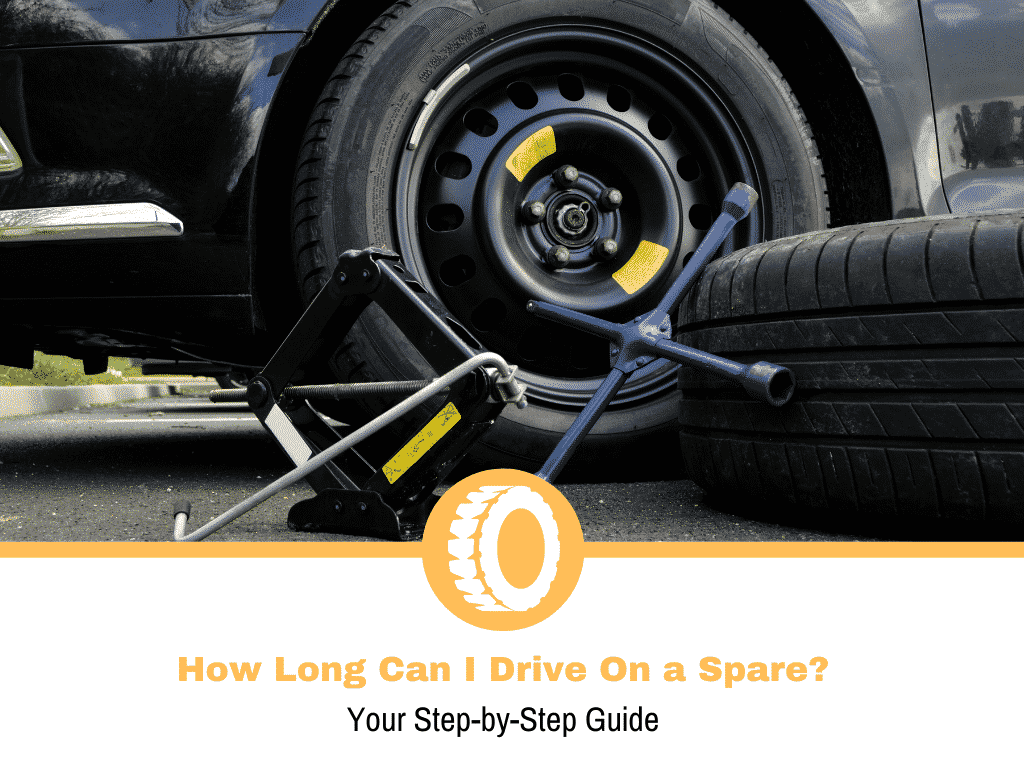 Fast forward today, modern spare tires are categorized into two types: a full-sized spare tire, typically found in SUVs, heavy-duty pickup trucks, and full-size sedans, and the more common space-saver, or donut tires. Talking about the latter, these tires are compact and lightweight, having a smaller width and diameter but with the same lug nut hole spacing, hence the name. The catch? These should only be used temporarily.

How Long Can I Drive on a Spare Tire?

Your owner’s manual will precisely indicate the maximum distance you should be driving on a spare, but the general principle when driving on a spare tire, especially a space-saver or donut tire is only 50 to 70 miles, with speeds not going beyond 50 miles per hour. These considerable distances and speeds are enough to get you safely to the nearest repair center and have your full-sized tire fixed or replaced.

How long can you drive on a full-sized spare tire?

A full-sized spare tire has a longer lifespan than its space-saver counterpart, mainly because it has the same size as the rest of your tires, so it can be driven longer than a donut tire.

However, you should take into consideration that spare tires don’t have the same rate of tread wear as your other tires, also it is possible that the spare has a different manufacturer than the rest of your tires, causing you to have traction and handling problems.

How long can you drive on a space saver/donut spare tire?

Due to its size and build material, its potential harm to other moving components, not to mention safety hazards, it is highly suggested to only drive with a donut tire for a maximum distance of up to 70 miles. Moreover, be mindful of your speed not go beyond 50mph, slowing down if road condition becomes challenging.

Damage to other components

Your transmission, suspension, and brakes can all be affected if you are driving on a donut spare tire for too long. Its mere characteristics of being compact and lightweight affect the balance among the rest of your tires.

You can wear out your full-sized tires faster

An automobile is built on precision and balance, so a slight imperfection can ruin other integral parts. In this case, the difference in width, diameter, and tread brought by the donut spare tire can cause uneven and premature wear to the rest of the tires.

Utilizing a space-saver or donut spare tires may be considered as the manufacturer’s answer to the constantly-changing consumer demands to have a greener, more fuel-efficient vehicle, with a lower retail price. These types of tires are cost-effective, improves fuel economy, and can maximize the storage space of compact vehicles.

Typically found in compact vehicles, one of the compelling reasons why manufacturers opt to install donut spare tires is its contribution to decreasing the car’s MSRP. Since donut spare tires only consist of steel rim and have less rubber, it also accounts for lesser total production costs.

Since space-saver or donut spare tire is twice lighter than the average full-sized spare tire, it has a significant contribution in decreasing the vehicle’s overall weight

As the name suggests, due to its smaller width and diameter, the donut spare tire is compact to snugly fit under a special compartment beneath the trunk, maximizing the overall interior space of the vehicle in return.

Infrequent use of spare tires

On average, you’ll just use your spare tires a maximum of two times within the lifespan of your vehicle. This observation brought manufacturers to use a donut spare tire instead.

The space-saver or donut spare tire is enough in doing its intended purpose, but not for long. Driving on this type of spare for longer periods can cost you more than getting yourself a new tire, not to mention its effects on your handling and control. Stick to your manufacturer’s recommendation on distance and speed limit when driving on a spare and have your full-size tire fixed as soon as possible.