Ever since the introduction of the first passenger cars, tire and car manufacturers have been working together to fine-tune the pair. A car’s performance can only be as good as the tire it has, so getting both of them right can be crucial. 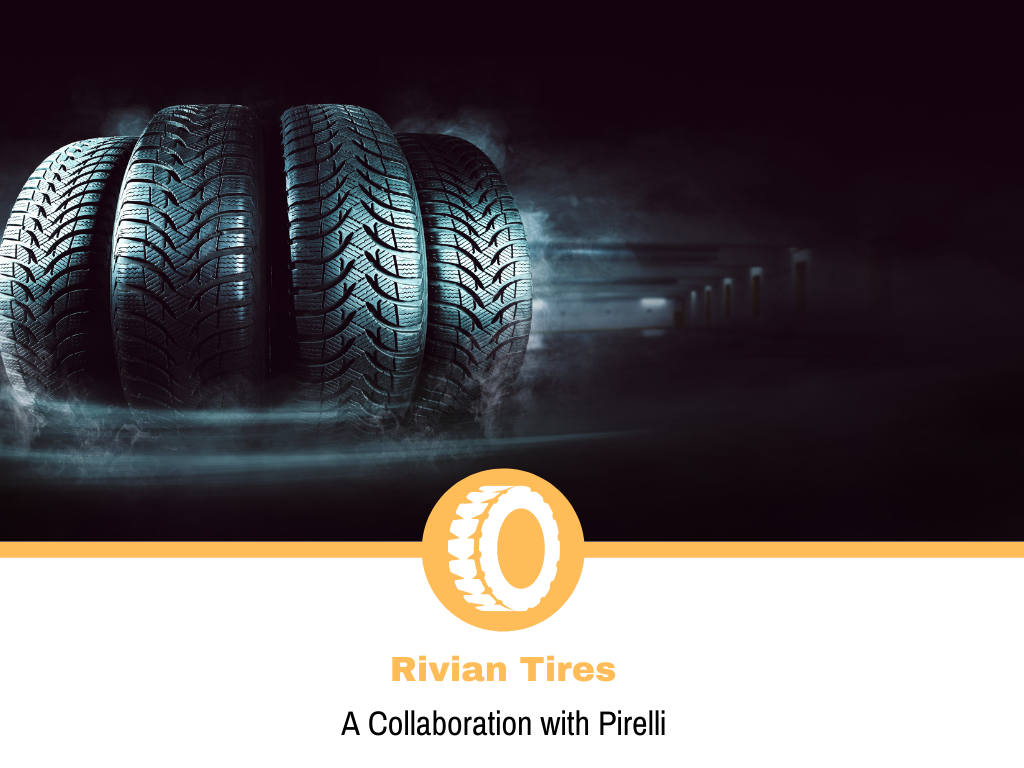 These collaborations are mostly part of the research and development on both sides, resulting in tires that can handle the performance some cars can have.

Unlike most cars that you can fit multiple tire models, a handful got a custom-made set of rubber. This doesn’t include your run-of-the-mill Corollas or Golfs, but something a bit more exclusive.

We all know that companies like Bugatti utilize custom tires that are capable of surviving the 4-digit horsepower and torque numbers.

Moving away from the brands that sell cars costing millions of dollars, there are some younger and more affordable options. One of those manufacturers is Rivian – an American automaker founded in 2009, which seems to be a Tesla competitor.

Tires for the Rivian models

About two years ago, Rivian partnered up with Pirelli, and both companies began working on developing tires, specifically both models the company has. Even though there are only 2 models, Pirelli produced 3 tires for various conditions and users’ requirements.

To be fair, Pirelli didn’t make entirely new tires from the ground up. Instead, they took 3 existing models from the Scorpion lineup and fine-tuned them specifically for the Rivian vehicles.

For the most part, the differences are subtle, and the most noticeable one is the size. Technically, you may be able to fit them into a different car, but we are talking about a unique size, so don’t get your hopes up. At the end of the day, Pirelli designed the tires primarily for the Rivian models, and you shouldn’t be looking at them for a different vehicle.

Considering that Rivian has a truck and SUV model, the tires I’ll be looking at are based on tires that Pirelli manufactured for these types of vehicles.

The Scorpion Verde All-Season is Pirelli’s answer to a well-refined touring option for people that are looking for a more ecological option. This is the model that people will go for in cases where they want a better range and will be prepared to make a few sacrifices in terms of performance on the limit.

When it comes to electric vehicles, the range is crucial for some people, and this is where the tires can play a significant role. Reducing the rolling resistance means that less energy will be used to get the tire rolling, and as a result, the battery won’t be drained as quickly. To address this, Pirelli made a few tweaks in the existing Scorpion Verde All-Season.

The rubber compound gets a bit of work, increasing the amount of silica used, which not only makes the tire better in colder and wet conditions but also helps reduce the rolling resistance. On the performance side of things, the tire should perform almost identical to the Scorpion Verge All-Season, so this is just to reduce the resistance.

There is another change in the compound that the company made. The internal construction remains more or less unchanged, but a few changes are made to the materials. By going for lighter materials, Pirelli aimed to reduce the tire’s weight, which can help improve the range of the Rivian. As a bonus, reducing the unsprung mass means that the suspension will work less, resulting in some slight improvements in the handling department.

Pirelli also did some work on the tread pattern to set up the tire to perform better for the Rivian models. The design is a bit narrower than the original Scorpion Verde All-Season, so there is technically less surface area. Despite that, the tire won’t lose its performance but will reduce the amount of energy required to move the car. It achieves that by improving the footprint and distribution, enabling the tire to perform as safely as the original. All of this put together means that you have a tire with less surface area on the road without any compromises.

Size-wise, the Scorpion Verde All-Season for Rivian can be found only at 275/55/R21.

Despite coming in an SUV or truck flavor, some people may want to have some fun with it in the corners. To satisfy that target group, Pirelli took its popular Scorpion Zero All-Season model and modified it for the Rivian lineup.

Don’t take this the wrong way; the Scorpion Zero All-Season is an excellent performance-oriented tire, but in this case, Rivian needed something more. Essentially, the company wanted a tire with sporty characteristics without compromising the range too much. To adhere to this, Pirelli used a few tricks up its sleeve to achieve that.

The Scorpion Zero All-Season for Rivian features nano-composite compounds aimed at increasing the levels of grip. This should also help improve the stability, resulting in a very sporty-feeling tire.

A key aspect of the Scorpion Zero All-Season is the traction, but in the case of the Rivian, Pirelli made the changes to improve it. The tread pattern gets updated with a new design that increases the contact patch’s size, enabling the tire to bite down into the road without slipping. Plus, by increasing the footprint, the tire can deliver better handling characteristics, which is what it’s made to do.

The best part of it is that Pirelli managed to achieve this without compromising the rolling resistance, which is crucial for the Rivian models. Yes, the Verde option is better if you are after a longer range, but the Zero isn’t horrible in this regard.

As we all know, all-terrain tires are a combination of touring and off-road tires. They provide a decent off-road experience without too many compromises on the road. Considering that the Rivian models are off-road ready, the company decided to include a third tire option for people that plan to utilize that.

Also Read:   All You Need to Know About Uneven Tire Wear

Pirelli’s choice was the Scorpion All-Terrain, an excellent tire that can deliver pretty good performance in both cases. To be fair, it won’t perform as well as the Zero on the road, and it won’t be as good as a proper off-road tire but should be enough for most drivers.

Like most all-terrain tires, the Scorpion All-Terrain is an all-season tire, resulting in usable performance in winter. The 3PMSF rating means that it should fair better in snowy conditions than tires with the M+S rating.

It’s the same story with the previous tires – Rivian wanted a tire with low rolling resistance and excellent on- and off-road performance. Like in the previous cases, the upgrades are mainly in the tread design and rubber compounds.

The Scorpion All-Terrain is a tire that has a durable compound capable of resisting chips and cuts. Pirelli’s upgrade to lighter materials won’t change this. The tire will remain just as durable as the original one but will be a bit lighter, resulting in less wasted energy to get the car going.

Pirelli also made some minor tweaks to the tread pattern. The tire retains the high void design giving it self-cleaning properties and excellent traction in off-road scenarios. The area where there is a slight difference is similar to the touring tire. A slight reduction in the total area of the contact patch helps it reduce the rolling resistance.

Since it’s an off-road capable tire, this one has the smallest diameter, and the dimensions are 275/65R20.

What are the most similar tires to the ones made for Rivian?

Technically, the closest competitors in terms of performance are the tires that they’re based on. Pirelli took 3 of its existing models and made some minor modifications to them to adhere to Rivian’s requirements.

With this in mind, the closest competitor to the Rivian tires are the ones that they are based on. Pirelli’s Verde, Zero, and All-Terrain models will deliver almost the same performance for any other vehicle.

Can I fit the Rivian tires to another SUV or a truck?

Technically yes, but things aren’t as simple as they seem.

Pirelli designed the Rivian tires with a specific size option in mind, meaning that, unlike other tires, you can choose based on the morel you have. Here, you have only one size per type, meaning that you won’t be able to fit them as easily. For the most part, you may be looking into replacing the rims as well.

With that said, there is a slight problem. Rivian tires aren’t available for sale at the moment. Even though they may be in the future, there is no information if they will be available for the masses or Rivian owners only.